Folklore of the Hedgerow. Part Eleven. 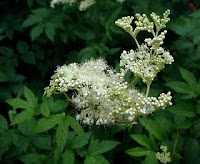 Folklore of the Hedgerow. Part Eleven.

Meadowsweet's herbal uses had a base in scientific fact, in common with many other folk and herbal remedies. In the 19th century, chemists isolated salicylic acid from Meadowsweet. The acid was a disinfectant so it not only made rooms smell better but helped the fight against bacteria. It was a painkiller and anti-inflammatory but hard on the stomach. Only after it was synthesised did it become an acceptable candidate for mass production and sold in tablet form as 'aspirin' – 'a' for acetyl and ' –spirin' for Spirea, the original botanical name for Meadowsweet.

It is one of the three herbs considered sacred by the druids; the other two are Vervain and Water Mint.

Creamy, perennial of damp waysides, meadows, marshes and woods, this tall, hairless plant flowers throughout Ireland from June to September. With a heavy fragrance. The flower heads are frequently visited by bees attracted by the heavy scent which can be so evocative of summer days in the countryside. In spite of this fragrance, the flowers produce no nectar. Insects, however, don't realise this but their visits serve to fertilise the plants which are heavy with pollen. A peculiarity of this flower is that the scent of the leaves is quite different from that of the flowers, the leaves having a heavy almond-like aroma whereas the flowers have a strong sweet smell.

Meadowsweet was historically used to flavour mead and it was because of this that one of its other names is Mead Wort. Cooks used the herb to flavour beers, meads and wines and added it to soups for an interesting almond flavour. The fresh leaves can be used to flavour sorbets and fruit salads. Infuse the flower to make a mild diuretic tea, let it steep to bring out the salicylic acid before serving. As a cosmetic, it was soaked in rainwater and used as astringent and skin conditioner.

It was also known as Bridewort because it was strewn on the ground at handfastings for the bride to walk on (wort is an old word that means herb or root) and it was also used in wedding posies and bridal bouquets.

This plant was given to Cúchulainn in liquid form and it was said to calm his fits of rage and outbreaks of fever and it may be for this reason that another name for meadowsweet in Ireland is Cúchulainns Belt or Crios Conchulainn.

It is also associated with death as the scent of its flowers was said to induce a sleep that was deep and fatal. However in County Galway it was believed that if a person was wasting away because of faerie influence then putting some meadowsweet under the bed ensured that they would be cured by the morning.

Legend says that meadowsweet was given its fragrance by the Land Goddess Aine. In some places the flowers were dried and smoked in a pipe (probably less damaging than tobacco.

Meadowsweet was also spread on the floor in medieval times to provide a nice smell and deter insects.

Its roots produce a black dye and its leaves a blue pigment and yellow is obtained from the top of the plant all of which were used by the Celts.

In Ireland it was used to scour milk vessels.
Posted by SilentOwl at 12:45 PM