Folklore of the Hedgerow. Part Four. 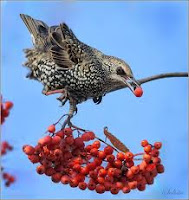 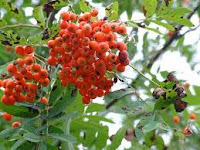 Folklore of The Hedgerow. Part Four.

Folklore of the Rowan Tree. Caorthann.

In early Irish law the Rowan was classified as an Aithig fédo or Commoner of The Wood.

The Rowan's mythic roots go back to classical times. Greek mythology tells of how Hebe the goddess of youth, dispensed rejuvenating ambrosia to the gods from her magical chalice. When, through carelessness, she lost this cup to demons, the gods sent an eagle to recover the cup. The feathers and drops of blood which the eagle shed in the ensuing fight with the demons fell to earth, where each of them turned into a rowan tree. Hence the Rowan derived the shape of its leaves from the eagle's feathers and the appearance of its berries from the droplets of blood.

In Ireland the Rowan has a long and still popular history in folklore as a tree which protects against witchcraft and enchantment. The physical characteristics of the tree may have contributed to its protective reputation, including the tiny five pointed star or pentagram on each berry opposite its stalk (the pentagram being an ancient protective symbol).

The colour red was deemed to be the best protection against enchantment, and so the Rowan's vibrant display of berries in autumn may have further contributed to its protective abilities, as suggested in the old rhyme: "Rowan tree and red thread / make the witches tine (meaning 'to lose') their speed".

The Rowan was also denoted as a tree of the Goddess or a Faerie tree by virtue (like the Hawthorn and Elder) of its white flowers. An alternative name, ‘quicken’ refers to the ‘quickening’ or life giving powers, while the Irish name Caorthann derives from the word Caor which means both a berry and a blazing flame.

There are several recurring themes of protection offered by the Rowan. The tree itself was said to afford protection to the dwelling by which it grew, and pieces of Rowan would be hung in the house to protect it from fire. It was also used to keep the dead from rising and tied to a hound’s collar to increase its speed. Sprigs of Rowan were used as a protection for the cattle and against the supernatural forces that may threaten the dairy products. It was kept in the byre to safeguard the animals and put in the pail and around the churn to ensure the ‘profit’ in the milk was not stolen.

There are also records of instances as late as the latter half of the twentieth century of people being warned against removing or damaging a Rowan in the garden of their newly purchased garden. It was traditionally planted in churchyards since it was considered a protection against evil.

The Rowan is particularly associated with the month of May. Here in Ireland at Beltaine livestock would be driven between twin fires to keep away evil influences. Homes, crops and cattle were believed to be of risk on May eve. The first smoke from a chimney on May morning should be from a fire of Rowan twigs, this was done to thwart any mischief that the witches might be planning. A piece of Rowan was put in the crops for protection and cattle going out in the morning were struck with a switch of wood. On May eve it was also the practice to put a loop of Rowan on the tails of livestock, especially cows, to protect them from the fairies. Also, on May eve sprigs of Rowan were placed on window sills, door steps and even the roof for protection.

The Rowan's wood is strong and resillient, making excellent walking sticks, and is suitable for carving. It was often used for tool handles, and spindles and spinning wheels were traditionally made of Rowan wood.

Druids used the bark and berries to dye the garments worn during lunar ceremonies black, and the bark was also used in the tanning process. Rowan twigs were used for divining, particularly for metals.

The leaves and berries of the Rowan are sometimes added to incense to aid divination and to increase psychic powers. It’s believed the bark and berries carried on a person will also aid in recuperation, and are added to health and healing sachets, as well as power, luck and success charms

Rowan wood has traditionally been used for making Druids’ staffs, and its branches used for dowsing or divining. Some believe magic wands made from Rowan are especially effective in ritual when psychic intuition is required.


The berries can be made into or added to a variety of alcoholic drinks, and different Celtic peoples each seem to have had their favourites. As well as the popular wine still made in the Highlands, the Scots made a strong spirit from the berries, the Welsh brewed an ale, the Irish used them to flavour Mead, and even a cider can be made from them. Today Rowan berry jelly is still made in Scotland and is traditionally eaten with game.

Rowans are a species that are at home in some of the more challenging parts of our ecosystem such as barren mountainsides. They are also one of the species that bear their male and female flowers on separate trees so that it is necessary to have both genders present in a population in order to produce viable seed.

The fresh flowers and the dried fruits are both used medicinally. They have laxative and diuretic properties that can be valuable in the treatment of arthritis and rheumatism. They are also used to treat menstrual pain, constipation and inflammation of the kidneys, and are also used as a gargle for sore throats.

The berries are high in fruit acids, Vitamin C and fruit sugars. The bark is used as a strong astringent to treat diarrhoea internally and to treat leucorrhoea as a wash.

Always consult your herbal practitioner or doctor before using herbs.
Posted by SilentOwl at 10:29 AM