Folklore of The Hedgerow. Part Three. 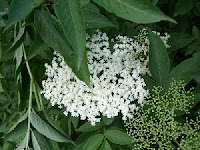 In early Irish law the Elder was classified as one of the Fodla fedo or Lower Divisions of the Wood.

According to this old Irish saying there are three signs of a cursed or barren place: the elder, the nettle and the lonesome calling corncrake. This has some basis in truth, as the elder is a very early colonizer of bare land, the seed of this pioneer species can be spread through droppings from passing birds.

The Elder is considered to have a Crostáil or bad temper or mischief in it and it was believed that if someone were struck with an Elder branch that after their death their hand would grow out of their grave.

Because of its association with witches Elder is considered hostile to children (especially infants). In Ireland it is dangerous and foolhardy to make a cradle out of Elder as the child would sicken and be stolen away by the fairies. In Ireland it is also said to be wrong to strike a child or animal with a piece of Elder as they would stop growing from that day onwards.

The Elder has been held in high esteem throughout our history as a medicinal plant and has even earned the name “Medicine chest of the country folk”. Parts of the Elder are used to treat everything from burns to the common cold and it has been suggested that extract of Elderberry may be effective in the treatment of the bird flu virus.

The leaves also have a scent that is slightly narcotic and there is even an old legend that warns of sleeping under the Elder because you may not wake up. Today extracts of Elder are used in skin cleansers and another legend suggests that if a young girl washes her face in the morning dew of the elderflower she will remain young looking. This may also be because the berries contain dyes that were used to darken grey hair.

Many Christians believe that elder is the tree from which Judas Iscariot hanged himself after betraying Jesus. It is also believed that the cross upon which Christ was crucified was made from Elder. In Ireland it was believed that the Elder tree refused to shelter Christ but the Ivy did so. From then on the Elder is the last tree to come into leaf while the Ivy is evergreen.

The Elder in common with the Hawthorn and the Rowan has strong associations with the Fairy folk and is a tree of protection. It is considered very lucky if you have one growing near your house. Traditionally a Rowan would be grown at the front of the house but the Elder’s place would be at the back door and it was said that it kept evil influences from entering your home. The aroma exuded by the elder's leaves has long been known to repel flies, so this folklore may have been borne out of the need to keep such insects, and the diseases that they carried, away from the kitchen and food.

Bunches of leaves were hung by doorways, in livestock barns, and attached to horses' harnesses for the same reason. Elder was traditionally planted around dairies and it was thought to be efficacious in keeping the milk from 'turning'. Cheese cloths and other linen involved in dairying were hung out to dry on elder trees, and the smell they absorbed from the leaves may have contributed to hygiene in the dairy.

Elder trees were also traditionally planted by bake houses as protection from the Devil (what with all those hellishly hot ovens within!) and loaves and cakes were put out to cool under the Elders. Any foods left out overnight under an Elder however were considered a gift to the fairies.

It is sometimes called the 'hollow tree' because the spongy tissue within its smaller branches can be easily removed, thus providing hollow tubes, and many felt that this hollow offered a door into the fairy kingdom.

The Elder tree was also said to have the power of walking in the twilight and peering into a child's window when the child was alone.

Elderberries are a very good source of Vitamin C and also make wonderful jelly and wines – but don't forget to leave some for the birds. Use the flowers to make a delicious cordial or wine.
Posted by SilentOwl at 10:59 AM