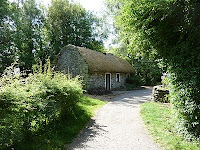 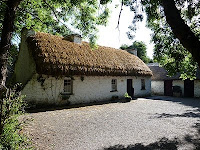 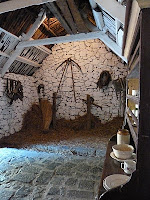 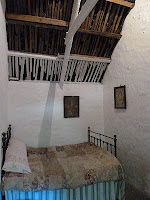 Although cottages came in many sizes, they were all only one room deep. The length of the timbers available for the roof determined the width of the house. For many inhabitants of coastal areas and islands, the primary source of rafters was timber washed ashore from the wrecks of ships. The houses were simple with clay floors, sparse furniture and small windows.

The byre dwelling was a cottage that was shared with the animals. A cow, a few chickens, a duck or two or a goose if they could afford one and a pig to pay the rent. Livestock were an extremely valuable asset to poorer farmers so they kept them within their dwelling. Usually built on a slope or at least with sloped floors with the animals on the lower end so their effluent would run away from the living quarters. This arrangement meant the animals were close at hand if there were any problems or the weather was too poor to tend them and they also benefited from the heat of the fireplace.

Labourers, worked not for money but in return for the right to a small plot of land, known as ‘conacre’, on which they could grow enough potatoes to feed their family and some winter feed for the animals.. By spring several tons of manure would be removed from the byre and used as fertiliser on their small plot.

A writer of the time describes vividly the conditions in which they lived:

The master never fed a labourer…it was on the contrary a chief object with him to keep such a person as far away from his dwelling as possible. He therefore allowed him to occupy, at some remote corner of his farm, a miserable hut, a mere shell, formed of mud or sods, without loft, apartment or partition and sometimes without any other covering than that of straw or any chimney than the door. In one corner of this hovel was lodged his cow, while in the opposite were his wife, his children and himself.

To us this combined dwelling house and cattle byre might represent extremely grim living conditions, but it probably wasn't as unhealthy as we might imagine. After a while the smell would not be noticed and throughout the winter the animals provided a certain amount of heat. It would be wrong to imagine that these people cared any less about hygiene than we do - standards were simply different. The practice of housing people and animals together links the west of Ireland with the rest of the Atlantic fringe of Europe - the same arrangement is found in Scandinavia, Scotland, Brittany and Galicia.

Water was supplied to cottages by means of a well that would be located by a diviner. A diviner uses a hazel forked twig to determine where spring water is to be found, it’s a skill that is said to be in the hands as only some people can feel the energies of the earth keenly enough to follow them. Once located it was the duty of the woman of the house to bring buckets of water from the well each day for drinking and cooking. Water for washing clothes, floors and general domestic and farm duties came mostly from the rainwater collected in barrels at the ends of the thatch.

Light was provided from the hearth and also from burning rushes dipped in fish oils, the smell was horrendous and the light fleeting. Candles were more expensive and sometimes difficult to come by, they were preserved for good occasions and were often used as a method of barter.

The bed in the ‘Out shot’ or ‘Cailleach’ was very short but this was not because people were very small compared to today. It was for a far more practical reason, it was because of the fear of TB. It was believed by the people of the time that it was healthier to sleep sitting up supported by bolsters or pillows.
The diet of the labourer and his family was simple, mainly bacon, cabbage and potatoes, with all the cooking being done on the open fire. Sometimes, Galway and Mayo being fine fishing counties, there was fish.

Milk was available from their house cow, with oatmeal replacing or supplementing potatoes when they were scarce. They also ate what they could forage in the wild – berries, nuts, nettles, wild mushrooms and now and then a rabbit or bird. However these were all occasional rather than regularly eaten foodstuffs. Another traditional food of the time was black pudding, made from a mixture of cow’s blood and oatmeal. The blood was provided by the occasional bleeding of their cow. Sounds awful but this provided much needed protein without killing their valuable animal.

Poorer people either produced their own food or obtained it by foraging or hunting. Outside of towns and villages, little or none was purchased in shops, even when these began to appear, for there was no money available and what there was paid the rent.

While the potato provided enough food to allow the poor to survive and grow in number, it also caused their diet to become very narrow and restricted, a massive change from the varied diet eaten in earlier times and, as would become clear, a very dangerous dependence. By the mid seventeenth century the potato had become the main food and consumption reached eight pounds per person per day. It was easy to grow, a small plot could provide enough to feed a small family and it was very nutritious and filling.
Posted by SilentOwl at 2:43 PM