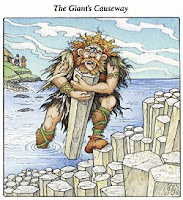 In County Antrim there is a place that is steeped in the mythology and folklore of Ireland. That place is known as The Giants Causeway.

Its ‘discovery’ was announced in 1693 by Sir Richard Bulkeley, a fellow of Trinity College, Dublin, when presenting a paper to the Royal Society. However, the ‘discoverer who should have received credit for it was the Bishop of Derry who had visited the site a year earlier.

The issue was finally settled in 1771 when a Frenchman by the name of Demarest, announced the true origin of the Causeway was the result of volcanic action.
In 1740, a Dublin spinster’s realistic sketches brought the Causeway to the attention of the public and ever since it has attracted visitors from all over the world.

What of its folklore?

One of the legends that surround The Giants Causeway concerns two giants, Finn McCool and Benandonner.

Finn MacCool, the handsome giant of Ireland, lived on the wild northern coast, and occasionally he sat at the edge of the sea, sucking on his thumb. Whenever he had a question, any puzzle at all, he sucked that thumb and the answer came.

Finn fell in love with a giantess named Oonagh who lived on a rocky isle across the Irish Sea. Trouble was Finn could not swim, so how would he reach his beloved? He thought a while, and then he tore up some trees, and he built himself a boat, but when he stepped inside, that boat sank under his weight. After all, Finn was a giant.

So Finn sucked on his thumb, and next thing he was gathering columns of rock, six-sided each, flat-topped and weighing 10 tons. He stood on the shore and tossed those columns, one after another, into the sea. In this way he formed a path all the way to Oonagh’s Island.

Oonagh was very impressed (what woman wouldn’t be?), and it was not long before they were married and shortly after she had a son (fast workers, these giants?). They called their son Ossian and he grew up and left home to live with the faeries (I’m saying nothing?) but let’s just say they were sad when he left.

However, they were not sad for long and they commenced singing. Everyone could hear them and as their singing was better than Jedward’s it didn’t upset them. Everyone that is except Benandonner, he was another giant that lived a lonely miserable life on the Isle of Straffa and he was very happy being miserable and did not wish to hear happy singing coming from his neighbours.

Benandonner decided he had to silence yer man Finn and while he was at it he might as well take his wife home with him so with this in mind he challenged Finn for Oonagh’s hand. Now Benandonner was a big ugly smelly yoke and as he dressed in old rat skins and had three eyes, one in the middle of his forehead, he had no chance of Oonagh but Finn Invited him to come over “if yer think yer hard enough”.

The following day Benandonner arrived at the house and knocked on the door. Oonagh answered, “Finn’s out at the minute come back tomorrow”. “O.K” said Benandonner and as this made him very miserable altogether he was quite happy.

When Finn arrived back he saw Benandonner’s footprints outside his door. “Jezus would ye look at the size of them” he began having second thoughts. “Oonagh, that gobshite must be massive”, said Finn. Oonagh said “Don’t you be worrying; I have an idea that will put manners on him”

The next morning there was a knock on the door. This time Finn was home but he was hiding in the baby cradle that had once been Ossian’s. He was covered with blankets so only his eyes could be seen.

“Is this yer baby” Benandonner asked, “Yes he is, and his father will be home soon”.

Oonagh had baked some cakes and invited Benandonner to sit down and have some while he waited. What he didn’t know was that she had baked a cake with pieces of metal in it and it was this that she gave him. When he took a bite he let out a scream “I’ve bust me tooth” he wailed, “What have you put in them”. “Only a bit of butter and cream, a few eggs and some flour, sure the baby loves them” and she gave one to Finn (without any metal in it).

“That child must have teeth of iron” said Benandonner and he bent over and for some unknown reason he stuck his finger in the baby’s mouth (he wasn’t a bright giant).

Surprise, surprise, Crunch! Finn bit down so hard he bit the finger clean off.
Benandonner let out another scream, “What kind of child is this, he’s strong enough to bite off a giant’s finger?”

“Aragh, he’s only a wee thing” said Oonagh, “He’s not that strong but his daddy is trying to teach him how to get better”

Benandonner laughed nervously. "What kind of things is he teaching him?" he asked.
Oonagh smiled “Oh just things” she said.

Benandonner began to tremble, and then he said, "I'll be going now," and he backed out of the house and ran across the causeway. Halfway across a thought struck him, and he stopped. Working feverishly with all his great strength, he carried away the middle section of those rocks, one by one, for he had no wish for a visit from the monstrous Finn.

So that is the reason why only the beginning and the end remain of the Giant's Causeway, one on Staffa Island, home of Benandonner, and another on the Antrim coast, just near the place where Finn lived.

Volcanic action or a giant’s fear, you decide.
Posted by SilentOwl at 1:00 PM