The Hill of Tara. 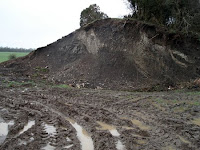 The ancient and sacred Hill of Tara was once where the High Kings of Ireland ruled. The place where the Druids lit the fires to announce the rebirth of the sun and the Faerie folk walked beside man at certain times of the year.

We all know what has happened at Tara, how our government has shamefully bulldozed their way through the wishes of the people and rode roughshod through one of our most important sites giving scant if any regard to the heritage of the Irish people.

John Gormley who laughingly purports to represent the Green Party took over from Dick Roache as the Environment Minister and the first thing this poor excuse for an environmentalist did when he became minister was to give the thumbs up to the M3 to go through Tara.

Do you believe in Faeries? Do you know what happens when you upset them? Fianna Fáil and the Green Party do.

Now I’m not suggesting for one minute they believe in the Faeries (although they seem to have been away with them often enough) but they have reaped what they sewed.

Since they carried out this wanton act of vandalism the economy collapsed, we have lost our independence having become a slave to the I.M.F. and both Fianna Fáil and the Green Party have been sent to the political graveyard.

We have a saying “Beware the law of the returning tide” it simply means be careful what you do for as sure as night follows day what you do will come back on you tenfold, good or bad.

Curse of Tara, curse of the Faeries, or just cursed politicians? You decide.
Posted by SilentOwl at 12:30 PM