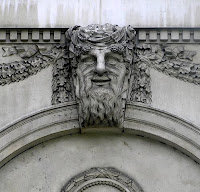 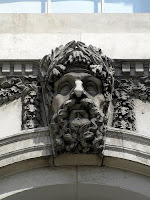 Ten thousand years ago, before the coming of Christianity in Ireland, the rivers served a very important role in the lives of the people living along its banks. It was their source of food, and a place where their cattle and crops thrived on the nourished plains. It also acted as a barrier between opposing armies and clans. People saw the rivers as powerful objects and worshiped river gods. Often people placed weapons and ornaments of precious metal in the river as offerings to these gods.

The river gods of Ireland were replicated in Ireland's architecture by Edward Smyth, when he designed the keystone sculptures depicting the faces of the river gods, on the Customs House in Dublin, in the late 18th century.

When James Gandon was commissioned to design the Custom House, Dublin, he approached Edward Smyth a relatively unknown sculpture and asked him to design a head depicting each of the fourteen major rivers of Ireland. He designed them based on traditional classical motifs and incorporated the principal features of the counties through which they flowed into their crowns. He worked on them during the 1780s and finished them in 1786, after which Smyth was to become Gandon's principal Sculptor.

He worked on other prominent Gandon developments; including the Kings Inns, The Four Courts, Parliament House, O'Connell Bridge, The Rotunda Hospital and the great mansion at Emo, Co. Laois.

Other images are of the Custom House Dublin.
Posted by SilentOwl at 1:10 PM