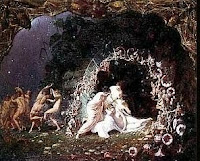 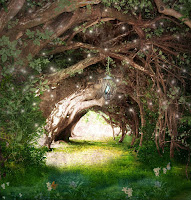 This post is in response to a question from Radcliffe on 20th March 2011.

From French souterrain, from sous ‘under’ + terrain ‘ground’.

There have been various theories put forward concerning the use of souterrains. Some have suggested they were constructed as a place of refuge in time of attack, others have suggested that they were intended as storage facilities for weapons and supplies. There are suggestions that the souterrains were used as a primitive form of cold storage for perishable goods, the forerunner of the modern day refrigeration method?

It would have been difficult to get anything in and out of the souterrains through the tiny entrances. It doesn’t make a lot of sense to build a fairly large space for storage implying you intended to keep a lot goods there and then only provide an entrance through which it would be difficult to carry objects much larger than a small sack.

Neither does it make sense to store weapons and supplies in a deep, dark and damp hole in the ground. As a place of refuge, there are many souterrains that have only one entrance which would make it more of a prison than a place of refuge. Dark, damp, no sanitation, no water, I don’t think it would be my first choice?
It is sad to imagine that during the ravages of the famine, of which there were many in this country including 1740 The year of The Slaughter, that the souterrains may have been used as places of refuge for those suffering from the freezing weather and starvation.

There is no definite evidence that souterrains were used as places of ritual practice but there are certainly ritual aspects to their use. Evidence of fire has been found at a number of sites as well as cremated human bones. When you consider that superstitious Iron Age humans may have looked upon the souterrain as an entrance to the domain of the earth goddess/gods? It may also have taken on significance as a symbol of the womb of mother earth sp may have been used for rituals surrounding birth and re-birth? They may also have been seen as places where you could commune with the spirits and with nature, a place of deep meditation.

Could it be possible that there were varied uses concerning souterrains that may have influenced their designs? Some do have more than one entrance so may have served as escape tunnels? Some have been discovered under Raths so may have been storage facilities for weapons and supplies? Some, due to a constant cold temperature could indeed have been used as primitive fridges. However, some may have been used as a place of ritual. It’s certainly food for thought.

There are also a number of legends concerning the Tuatha de Danann, and the Sidhe in regards to souterrains.