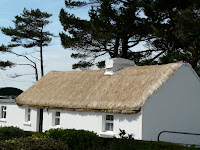 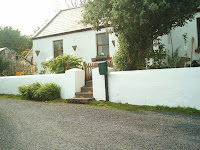 The Vernacular house in Ireland.

The vernacular houses of the north, southern and west of Ireland were almost always single storied although in some places a second storey may have been added in more prosperous times. This would have been more common in the east and the midlands. Even in the villages and towns, the single storied cottage often lined the streets, and a few of these early, traditional houses although rare still survive. The small single storey house with a thatched roof remained the dwelling of the ordinary family.

The traditional house of the remote west was moulded by the rugged landscape and the ferocity of the Atlantic weather. Rectangular, narrow and just one room deep, the narrow plan was mainly due to the scarcity of timbers for roofing and since only relatively thin poles or timbers salvaged from the ocean and sea shore were available, the roof spans were small. The cottages hug the landscape and seem to be part of it. Thatched roofs held down by ropes tied to pegs which are hammered into the walls or tied to heavy stones to protect them from the fierce Atlantic winds. These days a lot of the old thatched roofs have been replaced with slate.

A feature of the vernacular cottage in the North West and west of Ireland is the outshot bed; this is where a projection in the wall next to the hearth/fireplace would accommodate a small bed which was further protected from draught by a curtain. It was here that the Grandmother would sleep and here she would be snug and warm. In Mayo we call this the “Cailleach”, not a very flattering term as it means Old hag (don’t blame me). This bed was beneficial in other ways for if the older member of the family became bedridden they could still play an important role in the social and domestic fabric of the household. We should remember that their advice and skills were invaluable and they generally possessed a treasure trove of stories, an art that sadly is fast disappearing in the age of technology. Also and in some ways more importantly it showed them that they still mattered, they were still loved.

The vernacular cottage was always built of rough stone or stone and mud and in later years they would be lime-washed or plastered and then lime-washed (also known as white-wash) and they stood out against the backdrop of the landscape.

It was common for the back door to be opposite the front door and this made it easier to sweep the floor in windy weather (you opened the door on the calm side). The front door was usually a half door and this had the advantage of allowing in more daylight into the large central living room and also kept the animals out (farmyard and poultry). It also allowed conversation with passers-by.

Windows were small and of the up and down sash type with wide interior sills due to the thickness of the walls.

Early cottages did not have any foundations and the floors are usually finished in rammed earth, slate or stone flag, or tiles. These days it is common to find cement or concrete floors with a floating floor of timber unless you have been extremely lucky and have managed to find one with the original flagged floor.

The main fireplace in the central room is large and open of the inglenook type with a large stone or timber lintel, usually a ships timber salvaged from the sea shore. Today it is usual to find a wood stove set in the opening but it would have had an open fire over which you would swing a fire crane, on this you would hang an iron cooking pot or kettle.

On either side of the large central room there would have been larger rooms. In our cottage we have divided one of these into two bedrooms with independent doors. All these rooms have open fires although there is also the addition of modern day central heating throughout. We have the addition of a small extension which serves as a galley kitchen and a further small extension that serves as a shower room and toilet room.

Most vernacular cottages were built into the landscape, usually protected by a hill or some other natural feature, although groundwater running down the hill inevitably led to damp.

These types of cottages are fast disappearing from the Irish country side as more and more people buy them only for the site they sit on, They then knock them down only to build a modern style house. Now I’ve nothing against freedom of choice (how on earth do some of these monstrosities get planning permission?). However, I do believe that our cottage has character, an old world charm, it has soul representing our history and heritage and it doesn’t intrude on the landscape like some of those modern Spanish style mansions built not as homes but as B&Bs where the kids are put in the garage or loft for the holiday season as their rooms are worth euro’s (I’m not suggesting their all like that).

I will be fair though and say that in times gone by our ancestors must have looked out of their round houses and thought “How on earth did they get planning permission?”

Finally, one thing I have noticed about the type of people who buy and renovate these old cottages to live in. They are all quite similar (the ones I know anyway). They love their cottages, the heritage and history, the character and quirkiness. They usually grow their own or love organic gardening and are environmentally aware. I don’t intend to generalise and if you own and live in a vernacular cottage and are totally opposite to those I have described than “No offence intended”.

I will add a couple more posts that will cover the folklore of the Irish cottage and some of the artefacts that would have been used in days gone by so I hope that like me it may give you an insight into a dying tradition.

The bottom image is of our cottage in County Mayo.
Posted by SilentOwl at 10:07 AM