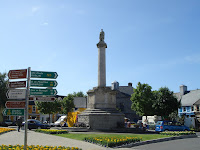 I have written previously on this blog about St. Patrick in a post entitled ‘The Serpent and St. Patrick’ on 9/9/10 so I won’t say too much today.

If you know any of the history concerning St. Patrick you will no doubt know that he is credited with driving the snakes from Ireland. However, did you know that the snake or rather the serpent is just a metaphor for a pagan? Serpent means Wise One in the old Arabic and St. Patrick uses the word in a symbolic sense rather than literally. He attempted to drive the ‘Serpents’ specifically the Druids from Ireland. So the celebration today is really celebrating the spread of Christianity throughout this island and the subjugation and conversion of the Druids. In some ways it is similar to the celebration of burning Guy Fawkes on bonfire night in England. Oh by the way St. Patrick wasn’t even Irish so why is he the patron saint as there are some who would argue that there are many others more deserving of the honour.

Some have suggested that St. Patrick’s day was designed to coincide with the spring equinox but I won’t get into that today. I would just like to wish all who follow this blog a truly happy day today.

Whether you are Irish in blood or heart, Christian or Pagan
we all need to celebrate on the odd occasion.
(that sounds quite poetic?).

We have a statue of St. Patrick in the middle of Westport (my home town) and Westport is in the shadow of our mountain which we call The Reek locally but it is called Croagh Pádraig or Croagh Patrick meaning Patrick’s Mount. Above you can see the images.
Posted by SilentOwl at 7:46 AM