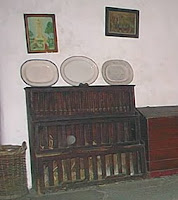 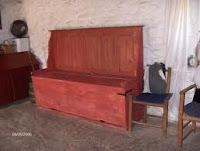 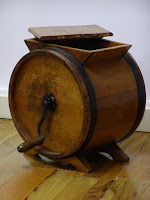 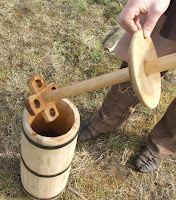 Beds varied in design from a basic wooden box type structure with a straw mattress to other more elaborate set ups. Irish country life was and is built around the family and it was considered normal for a son or daughter to get married and share a house with elderly parents, who invariable slept in the warmest place. This was usually next to the hearth or fireplace and was known as the ‘Outshot’ or ‘Cailleach’ (See previous post).

There may also have been a ‘Settle Bed’, this was a very clever contraption for during the day it acted a a seat and at night it could be folded down to act as a bed. It was usually made by a local carpenter and could be any size you wished in order to accommodate family members. In the old cottages it may also have been used to accommodate the casual visitor (if not required by the family). Part of the folklore mentions that people used to regularly wash down the wooden frames with lime wash to aid in the prevention of diseases such as cholera. Don’t forget that in Ireland it was common to keep a burning lamp or candle in the window to guide wayward travellers. In many ways the old settle bed was the forerunner of the modern bed settee.

The dresser was and probably still is one of the most important bits of domestic furniture as it was used to display the wealth and status of the household. The upper section would be used to display the ceramics (we use ours for blue and white willow pattern) and mementos. There are normally two drawers under which there will be two cupboards. The dresser was a great place for storage (still is) and was used for pots and pans and butter making utensils. A variation that you don’t see in the cottage anymore (thank the god’s, because of the smell) was the coop dresser, which used the bottom compartments to house chickens. This warm and safe environment ensured that eggs were always available throughout the year. Having the hens inside meant that you always knew where the eggs were when the hens had finished laying. This also prevented the hens laying in the hedgerows or up in the thatch of the roof and it also stopped arguments with your neighbours over whose chicken the egg belonged to. Chicken coops of this type were first noted in the inventories of the large country houses of the 17th and 18th century.

The Fireplace and the Fire Crane:

The fireplace was and still is the heart and soul of the cottage. It is a place where people gather and where life revolves. A place for reading, sewing, heat, and story telling. The focal point of the cottage. The fire was never allowed to go out, ashes were spread over the embers to “keep them in” until the morning. There is an old saying in Irish, “Nil aon tinteán mar do thinteán féin”, translated it means “There is no fire like your own fire” and in a way this illustrates the importance we place on the hearth. On the interior wall of the Inglenook firplace we used to have hung the Fire Crane, this was an ingenious method that was used to suspend cooking pots over the open fire. We still have ours (it’s in one of the barns), no longer used in modern cottages as we have replaced the open fire with a wood burning stove. Cottages today have Stanley Ranges (you may call them an AGA?) and modern cooking facilities.

Every cottage in the country would have had its own butter churn and these would be of various designs. Here are the two most common ones.

This was a common type which was very strong and made in a conical shape with a splayed neck into which a lid was fitted. The cream was then agitated by a wooden dash provided with a long handle which passed through a hole in the centre of the lid.

In this smaller churn the cream was agitated by a wooden frame by turning a crank handle. When it was first introduced it immediately became popular with the domestic family. It had a limited capacity so was not really suitable for use by the larger farmer who may have been involved in the production of butter for sale. Our cylinder churn now sits on the top of one of the kitchen presses (cupboards) and serves an ornamental purpose.

When churning butter everyone was expected to take a turn, a refusal would bring down a curse from the fairie folk and great misfortune on the poor unfortunate who refused.

The manufacture of these churns was carried out by the local cooper (barrel maker).