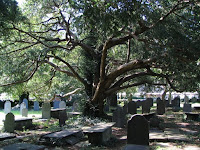 Trees have always had a special place in myth and religion and the Irish language even has a special word for the sacred tree, 'bile'. Poets and artists; scientists and historians; gardeners, ecologists and thinkers, all look to the tree, yet none can create it, only time can. The tree inspires; it has long given shelter. In common with stone, it remains the supreme, silent witness of all that happens. It personifies beauty, romance, rebirth and mystery, and for those who heed superstition, it can summon menace in the form of the revenge of the fairies, as well as the wrath of the gods.

Our ancestors were well aware that the tree should be respected. Under Brehon Law, it was protected. Modern man is, unfortunately, far more primitive in his understanding of the natural world and its spiritual self. A vicious storm might fell a tree, but only man will cut a forest down in the name of profit.

Pre-Christian Ireland had its share of sacred trees. A specific tree not only served as a landmark, it often made a place special. One such tree is the Yew.

The Yew is the longest lived tree; it is also known as a guardian forming the gateway pillars to the Otherworld and features in churchyards. It protects the dead, and is linked to kingship and war, due to its use in making bows and spears. It could also be used when making wands.

It has been suggested that in times gone by, when a pagan burial was carried out a sprig of Yew was placed on the deceased person’s chest and this could have resulted in some of those sprigs propagating in the same way as a gardener would propagate a cutting. These would eventually grow in these burial areas so marking them out as burial sites. There may or may not be some truth in this. It is an interesting idea though.

Staves of yew were kept in pagan graveyards in Ireland where they were used for measuring corpses and graves. The wood or leaves were laid on graves as a reminder to the departed spirit that death was only a pause in life before rebirth.

When the Christianity built upon our sacred sites these trees would already be present, so accounting for very old Yews in places where churches have been erected hundreds of years ago.

The yew's reputation for long life is due to the unique way in which the tree grows. Its branches grow down into the ground to form new stems, which then rise up around the old central growth as separate but linked trunks. After a time, they cannot be distinguished from the original tree. So the yew has always been a symbol of death and rebirth, the new that springs out of the old.

The Yew itself has particular qualities which emanate a feeling of awe in its presence. The natural Yew forests that still cover parts of Europe are places with an intense feeling of atmosphere. In the early morning mists, such vast forests become forbidding places that can give a strange sense of unease to a modern day visitor, let alone a hapless Pagan, at the mercy of natural forces and of simpler mind and understanding.

An old folk-tale tells why yews are dressed so darkly.
When the yew was a young species, in times when there were few people, it thought that all other trees were more beautiful, for their colourful leaves could flutter in the wind unlike its stiff pine needles. Thinking that the faeries had deliberately made it unattractive the tree pined. However, the faeries wanted to please the yew, and it woke one sunny morning to find its needles had changed to leaves of gold and its heart jumped with joy. Some thieves came and stole the leaves, making the tree confused and sad. So the fairies tried again and gave it leaves of pure crystal and the yew loved its sparkle, but a storm of hail came and the crystals shattered. Then they gave it broad leaves and it waved them in the air, only to have them eaten by goats. At this the yew gave up, for it realised that its original dress was by far the best, for it was of permanence, of long ages and deep knowledge, and in this the tree found comfort.

Most Pagans view death as a passage rather than an ending, something to be celebrated, and not be feared or despised. The dying Pagan faces the task of saying goodbye to this world and hello to the next. Death is such a fundamental process in nature that, without it, life could not exist. Life constantly changes into death and each moment of death is a moment of rebirth. We perceive beginnings and endings, but the flow of existence is never-ending.

Unfortunately this view is not shared by the mainstream Christian religions so the cemetery is nowadays looked upon as a place of fear rather than a sacred place of return to the ancestral realm.
Posted by SilentOwl at 12:45 PM