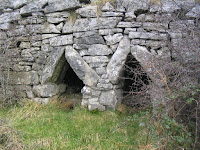 Sweat Houses were used in Ireland from the earliest times down to early in the 19th century for the cure of rheumatism; it was also reputedly a cure for temporary madness.

Many Sweathouses’ were round structures with a corbelled roof very similar to the beehive huts. Some had a hole in the roof to allow smoke to escape and this hole would be covered with a flat slab of stone prior to sealing the naked person using the sweathouse inside. It has also been recorded that mixed groups of men and women used sweat houses, again entering naked

They are generally sited next to or near water (a stream, river or Lough). The surviving examples are usually about seven feet in height and about the same in diameter with a low lintel covered door through which you must crawl.

Archaeological evidence suggest that a large turf fire was started inside the house and kept burning until the temperature inside became hot, after which the embers and ashes were swept out. Rushes or other plants were then placed within the house to form a cool surface on which to stand or sit.

There is also evidence to suggest that instead of lighting a fire within, some sweathouses used hot rocks heated outside the sweathouse and then placed inside, very similar to the Native American methods. Then the person who wished to use it, wrapping themselves in a blanket crawled inside and sat down. The door was closed up and the person would remain within for an hour or so until a state of complete perspiration had been attained.

Then crawling out you would plunge straight into cold water (nearby stream etc) after which you would be rubbed down until you became warm. This process would be carried out a number of times. After several baths at intervals of some days the person commonly got cured.

It has been suggested that sweathouses were generally used around autumn; this is around the same time as the Celtic festival of Samhain with its associations of mingling with the dead and communing with the ancestors and of travelling between the worlds.

Although we would not have used certain mind altering substances that some may find available today the use of magic mushrooms and other commonly found plants which appear at this time would and were used. This would enable the users of sweathouses to produce a consciousness altering experience in which people could interact with the spiritual forces through visions. This may have been of use to any religious faction, Pagan or Christian. So now we have both a healing function and a spiritual one making these structures extremely important to the local community.

By the eighteenth and nineteenth centuries the accepted use of sweathouses may have become part of the folklore of a community, a way of placating the faerie folk in case some disaster may happen. If anyone doubts the strength of belief in the Sidhe here in Ireland I would suggest you read the article I have posted concerning the case of Bridget Cleary. In the early twentieth century this poor unfortunate woman was burned to death because people believed that she was a changeling.

In Germany a Turkish bath is called an Irish bath, as the idea is said to have come from Irish Sweat Houses.

The exact date of the construction of sweathouses is unknown, but they were used from the earliest times to the early nineteenth century.
Posted by SilentOwl at 1:40 PM