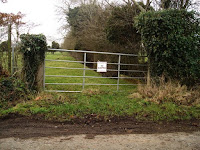 Hungry Hall is an old place name in the townland of Barreen and is situated approximately 150 meters south of Balraheen crossroads and one mile north of Rathcoffey. The name refers to a gateway that leads into a division of land and its origin comes from the very tragic circumstances in the 1800s.

There are a number of versions of the story but the most interesting account was recorded in the schools collection that was conducted between 1937 and 1938 for the Irish Folklore Commission. It was part of a number of Folklore stories written by Mary Gill and Nan Crowe two 6th class pupils from St, Mochuo National School Rathcoffey.

The tale began when young boys began to disappear without trace in the general Rathcoffey area. Despite intensive searches and thorough investigations no trace of the missing children were found.

One day a man travelling in the Balraheen area close to Rathcoffey was passing by a house and needed to light his clay pipe. The house was a thatched house with a half door in which an old woman and her son dwelled. One record suggests on this occasion her son was away from the house as he was a soldier in the British army. The traveller was in the habit of getting a light for his pipe from the woman in the house. However, on this occasion the woman was not in the house and having called out her name he got no reply. As the door was open he decided to enter the house and help himself to a light for his pipe. There was a big cooking pot over the fire and the traveller bent down to the fire to get a cinder in order to light his pipe. As he bent down he saw the foot of a young boy projecting out from the pot. The unfortunate man got such a shock he immediately ran out from the house screaming.

The woman was arrested and eventually brought before the local magistrate Thomas Wogan Browne from Castlebrown (now Clongowes Wood). The incident can be dated to the period when Wogan Browne served two terms as a magistrate, firstly, for some years before 1797 and secondly, for a four year period between 1806 and 1810. At her trial she was accused of cannibalism and admitted the charge. Apparently she enticed the children into her house by offering them food. The Judge, Wogan Browne who was a landlord in the area informed her that he had many fine bullocks on his property and wondered why she didn’t she take any of his cattle. To this she replied ‘your lordship, if only you tasted the flesh of young boys which she described as tastier than veal, you would never eat another scrap of animal meat’. This remark horrified the court and not surprisingly she was sentenced to death.

Executions of the period would usually take place at the scene of the crime. Many highway men for instance that were apprehended and convicted of robbery in the eighteenth and nineteenth centuries were brought back to the scene and hanged at the spot of their crime. The execution of this woman took place close to her house at Barreen. There was a large tree beside the house where a gate was hung that led in to the fields at the rear. A rope was placed across a branch of the tree and from this she was hung. One problem that arose was how to dispose of her remains. As one convicted of eating human flesh she would not be allowed to be interred in consecrated ground. This problem was easily solved for at the hanging a barrel of tar was placed under her body and the tar set on fire. Her body soon fell into the barrel and was consumed by the flames. She was regarded in the local area as a Witch and her execution is the last recorded burning of a Witch in the locality.

The house where she lived was never again occupied and soon became a ruin. Due to the incident both the house and the adjoining division of land came to be known as ‘Hungry hall’. In later years a black dog thought to be the Witch in disguise was often seen running from Hungry hall to the roads nearby.

The story of the horrific events at Hungry hall was often told to children in order to get them to bed early and that is one of the reasons why the story survived in folklore to modern times.

It wouldn’t get me off to a goods night sleep.