The Birth of the Harp. 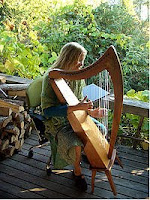 The Birth of the Harp.

Once upon a time long long ago there lived a man and a woman in a little cottage by the sea.

The man’s name was Cathal and he was a farmer. His wife Macha was an angry woman who spent her life chastising him.

One day Cathal returned from his work and sat down at the table. Macha came in from outside and seeing Cathal she began to scold him.

"Why are you still at the table?" asked Macha impatiently.

"Wife, I just sat down to my lunch five minutes ago. I've been in the fields all day!" replied Cathal.

"Well, get you back out to the fields. You still have work to do. Take your bread and cheese with you," grumbled Macha.

"Let me get a drink of buttermilk first. It's hot outside," Cathal said.

"Don't drink it all. It needs to last for a while."

Cathal said, "Woman, will you never be satisfied?"

"How can I be satisfied when you sit in the house all day and do nothing?" grumbled Macha.

Cathal grabbed his lunch and raced out to the fields.

"She never stops complaining," muttered Cathal. "I wish I could find just one thing that would make her happy."

A few days later, Macha and Cathal were on the beach gathering seaweed for the salt in it. As usual, Macha was grumbling.

"What is that sound?" she whispered.

They listened. There it was the most haunting sound they had ever heard. Where was it coming from? Cathal and Macha could not see.

They kept on walking, searching for the wonderful sound.

All they could see were the bones of a whale that had died on the beach. However, as they stood and looked at the skeleton, Cathal noticed that the sound seemed to be coming from the bones. As the wind blew, the sound got louder. When the wind stopped blowing, the music stopped, too.

Cathal said, "The wind is causing the music as it blows through the bones."

"That is the most soothing tune I have ever heard," said Macha in a quiet, calm voice and Macha was calm and uncomplaining for the rest of the week!

Cathal was surprised but pleased with Macha's new behaviour. He began to think about it. He finally decided that it was the music that had changed Macha.

"I must find a way to keep the music close to Macha. That way she will stay happy," said Cathal to himself.

"I know what I will do," he said three days later. He went and cut down a large tree. He bought some catgut. He shaped the wood into the shape of the whale's rib bones. He made strings of the catgut and attached them to the wood. Then he painted and polished the wood. It was beautiful!

Cathal brought the instrument into the house. He strummed the strings and waited. Macha came out from the back room. She had a lovely smile on her face.

"Oh, Cathal," she whispered, "you have brought the music to me! It is so beautiful! I am so happy!"

She sat down and began to strum the instrument, too. It was as if she was born knowing how to play. She played and played.

And Macha was happy from that day forward. Cathal was even happier because Macha was no longer complaining!

Some say that is how the first harp came to be. Of course there are other theories.
Posted by SilentOwl at 2:50 PM