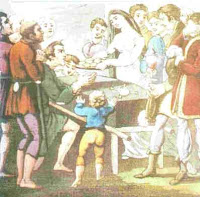 The Sin Eater.
A sin-eater is a traditional type of spiritual healer who uses a ritual to cleanse the dying of their sins. The sin-eater absorbs the sins of the people he or she serves and typically works for a fee. As the sins are usually consumed through food and drink, the sin-eater also gains a meal through the transaction.

Sin-eaters are often outcasts, as the work may be considered unsavoury and is usually thought to lead to an afterlife in hell due to carrying the un-absolved sins of others. The Roman Catholic Church regularly excommunicated sin-eaters when they were more common, not only because of the excessive sins they carried, but also because they infringed upon the territory of priests, who are supposed to administer Last Rites to the dying according to Church Doctrine.

A sin-eater typically consumes bread as part of the ritual of taking on the dying person's sins. He or she may also eat salt or drink water or ale. Sometimes, special breads are baked for the purpose of the sin-eating ritual, perhaps featuring the initials or image of the deceased. The meal is sometimes passed over the dead or dying body or placed on its breast to symbolize its absorption of the person's sins. The sin-eater may also recite a special prayer.

As a shamanic tradition, a Sin Eater would be employed by the family of a deceased person, or sometimes by the church, to eat a last meal of bread and salt from the belly of the corpse as it lay in state. By so doing it was believed that the sins of the dead person would be absorbed and the deceased would have clear passage to the hereafter.

The Sin Eater was given a few coins for his trouble but other than that was avoided (literally ‘like the plague’) by the community who regarded him as sin-filled and unclean as a result of his work. That is why Sin Eaters usually lived at the edge of the village and children were warned away from them. One other point of interest, who would eat the sins of the sin eater? for his sins were the accumulation of all the sins he had eaten through his/her life.

The Sin eater seems to have been mostly associated with the Celts of Wales and its borders with England. There have been stories of Sin eaters in Ireland and Scotland long ago.
Posted by SilentOwl at 3:57 PM