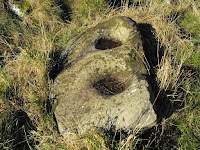 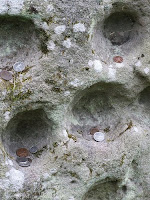 The bullaun stone consists of a large rectangular block of weathered limestone with a deep bowl-shaped depression, hollowed out of its upper side. “Bullaun” refers to the hollow in the rock itself, which can have many bullauns in it, although many have only one.

It may have been used in pagan worship with perhaps offerings of milk, grain or even blood deposited in the bowl. It has been suggested that the bullaun stone was also known as a “wart stone” and healing powers were attributed to the rain that collects in the bowl-shaped hollow.

The bullaun stone consists of a large rectangular block of weathered limestone with a deep bowl-shaped depression, hollowed out of its upper side. Believed to be of pre-Christian origin. They may have been used for pounding ingredients such as herbs or ritual grains in pre historic times as a mortar and pestle might be used today.

They may also have been used in fertility rites.

A bullaun stone is a stone in which a cup shaped hollow has been made either naturally or by hand. The stones are associated with religious ritual and magic and the water collected within was thought to have the ability to cure ailments. To gain a cure, it was said a person had to visit the stone three times in the same week and go around the stone seven times on bare knees.

As with sacred wells believers may have left offerings to the gods/goddess either in the water contained within the hollow or underneath the stone itself.

It is generally thought that bullaun stones date from the Bronze Age (2000BC to 500 BC, in Ireland).

These stones have an undisputable association with water, and with worship of the Celtic fire goddess Brigid, and her successor, St. Bridget. Many are found in association with early churches and holy wells.

Their presence at so many early Christian sites places them as being of massive importance to the pre-Christian inhabitants of Ireland -- something that the Church was eager to assimilate. Ritual use of some bullaun stones (reputedly for both blessing and cursing) continued well into the Christian period.

The Christian church incorporated bullaun stones into their rituals and it is easy to imagine the origin of the baptismal font or the Roman Catholic holy water font which greets people as they walk through the church door. Many people have a small font in their house which they fill with water from their church or holy wells.
Posted by SilentOwl at 7:55 AM

Email ThisBlogThis!Share to TwitterShare to FacebookShare to Pinterest
Labels: Folklore and Paganism.