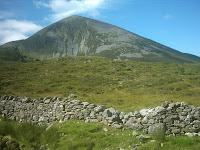 Long before St Patrick’s visit in 441, the Reek was known by its ancient name of Cruachán Aigli. Cruach’ in English is a variant of ‘rick’ or reek, or stacked-up hill and refers to the cone-shaped mountain. Some translators took ‘Aigli’ to mean ‘Eagle’.

On foot of this interpretation, the coat of arms for Westport town incorporates an eagle and, in the nineteenth century, part of the ridge extending eastwards from the peak or Reek was still called Mount Eagle.

Pagans celebrate the harvest with the festival of Lughnasa, held in honour of the god Lugh and whose name is now encompassed in the Irish for August (Lughnasa). (Nasa means games or an assembly). This festival took place throughout the country, often in high places such as The Reek.

In 1987 Gerry Bracken (a local historian) discovered that while standing at the Rock of Boheh which is about 7km (just over 4m) from Croagh Patrick, that the setting sun, rather than disappearing behind Croagh Patrick, actually rolls down the north slope of the mountain. This phenomenon lasts about twenty minutes and occurs on the 18 April and 24 August each year. These two dates, with 21 December, split the year into three equal parts and it is thought that they were used to celebrate sowing and harvesting seasons.

The spectacle of the rolling sun in prehistoric times probably merited the inscription on the Boheh rock outcrop, depicting many cup-and-ring marks, making it one of the finest examples of Neolithic rock art in Ireland and Britain


Before 1113 AD Lent or St Patrick’s Day (March 17th ) was the accepted time of year to make a pilgrimage to Croagh Patrick, but in this year a thunderbolt is said to have killed thirty of the pilgrims and the pilgrimage period was changed to summer, the most popular dates being the last Friday or Sunday of July. This story can be seen as an example of the old pagan gods gaining revenge on their Christian usurpers.

Although Croagh Patrick was originally a pagan sanctuary for the celebration of life’s abundance, under Christianity it became the scene of penance for supposed sinfulness. Many of the Christian pilgrims ascended the mountain barefoot, or even on their knees, as an act of atonement. The positive aspects of the original Celtic Lughnasa celebrations have been warped by the Catholic Church, imposing negative and alien concepts of control, fear, and guilt.
Posted by SilentOwl at 8:04 AM