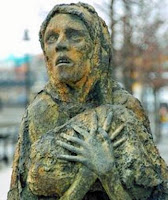 The dead have always played a central role in rural Irish folklore. Whether as insubstantial ghosts wandering through the countryside or walking corpses returning to torment the living, our former ancestors have always exercised an intense and continuing fascination for those who survive them and have formed the basis for many hair-raising tales.

The dead, it appears, will not go away. The belief in returning ghosts, spirits or corpses may have its origin in primitive ancestor worship. It was well known throughout the country that the dead had to be looked after at all times. Not to do so was to invite misfortune upon yourself, your family or your community. Nor has this belief wholly died out.

In 1993, there was an old man in north Cavan who claimed that, as a child, he remembered the corpse of his grandfather coming back from the grave on some nights during the winter months to sit at the fire and smoke a pipe of tobacco. He said that he also remembered actually touching the skin of the corpse and finding it very cold. His grandfather never spoke but sat warming himself by the fire. The rest of the family ignored this and went off to bed, leaving the corpse sitting in front of a good blaze. When they got up in the morning, the corpse was gone - presumably back to its grave. This story was borne out, without prompting, by one of the old gentleman's sisters.

Here is a story told to us as children in County Mayo and passed down through the family.

The Fír Gorta, The Man of Hunger in the English, was a tall thin looking feller who travelled around from place to place, village to village, town to country. He would knock on your door and as was our custom the stranger would always be welcomed and given a bite to eat, now as you know during the famine if food existed it was as scarce as hens teeth so some people would hide if they heard a knock on the door and some would deny they had anything in the house at all and some would even refuse to open the door. Some would even run him from the door.

For those people there would be no hope for they would perish in the famine, but there were those who would have a small piece of potato or a drop of milk and even though it might have to do the whole family our custom was one of hospitality to the stranger and so it would be offered to him. He would thank them for their generosity, politely refuse their meagre offerings and take his leave of them. Before he left them he would say, “Because of your generosity and your honest welcome you are truly blessed this day and neither you nor your family will ever die of the hunger. Tell none of this, but from this day forth your pot will never be empty and your jug will never run dry.

In the morning the mother went to the pot and within it found a great big potato that would feed the whole family and the jug brimming over with fresh milk and every morning from then on it was the same thing. They survived the hunger.

We were also told to always carry a piece of bread in our pocket because sometimes when out walking the boreen if you felt hungry it meant you were passing a place of famine death and if you did not eat something straight away then you would waste away and die.
Posted by SilentOwl at 1:43 PM