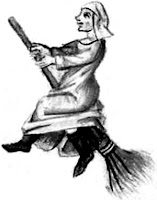 Broomsticks are an ancient symbol representing womanhood, while pitchforks are an ancient symbol representing manhood. Brooms, a symbol often associated with witchcraft, are used to sweep away, or cleanse an area of negative energy prior to performing magical and healing rituals. Wise women and witches would also use their broomsticks to perform a sort of imitative magic. They would go out into the fields and dance and leap high into the air while astride their brooms and pitchforks. It was thought that this would cause the crops to grow as tall as they were able to jump into the air.

Today, the broomstick conjures the mood of Halloween for youngsters - and it's another image with a meaning steeped in history. In centuries past, Samhain marked the time of year when witches would "fly" in order to divine the future. The image of witches flying off on their magic broomstick correlates to their use of magical flying ointments during their divinatory endeavours. After the witches covered themselves with the ointment they would lay down by the fireplace in order to keep safe and warm while on their shamanistic journeys.

Superstitious people, believing that witches could literally fly, assumed they climbed aboard broomsticks and rose through their chimneys to terrorize the countryside with their wicked deeds. But the "flight" was really one of spirit. Samhain marked a time when the boundaries between the worlds of the living and the worlds of the dead thinned. With the help of hallucinogenic herbs, those seeking spirit flights could explore this realm, using their experiences to divine clues about what the future held. The symbol of this flight, the witch's broom (also known as a besom), has historical associations with a variety of plants.

Bundles of this plant were attached to a handle and used in cleansing rituals prior to performing magic. This practice was thought to sweep away any negative energy and evil spirits that might interfere with the magic being performed by the witch. Broom is also a narcotic and depresses respiration.

The seeds were eaten by witches before flying so that they wouldn't become dizzy and fall off their broomsticks.

According to legend, the stalks of this plant formed the basis for magical flying brooms.

Ash often made up the handle of the broom and had the added benefit of preventing a witch from drowning.

The branches of this tree could also serve as the traditional witch's broom. A bundle of birch twigs could be bound to one end of the broom handle using a flexible, vine-type plant such as osiers.

This plant was also known as osiers. The larger branches of this plant were used to make the handle of the witch's broom. The longer, pliable twigs could be used to bind other materials to the broom handle.

Other plants have been associated with the witches' brooms, including bulrush, mullein and even corn stalks, if nothing else was available.

Come Fly with me.

As for the actual "flying," we again investigate herbs for some insight. The narcotic and hallucinogenic properties of many herbs served in witchcraft and magic rituals during ancient and medieval times. Many of these herbs became ointments with the addition of melted fat. Rubbed into the skin, ointments would carry the chemical properties of the herbs into the blood stream, causing a variety of physiological effects - irregular heartbeat, tingling, numbness, delirium, mental confusion, weightlessness, and hallucinations. These effects would create the feeling of flight, especially since the witches would often fast prior to going on their shamanistic journeys to heighten the effects of the herbs they used.

The motivation behind the desire for flight lay in the belief that upon leaving the physical body after death, spirits moved to the astral plane. Witches thought it possible to temporarily depart the body and visit this astral plane when in a trance or sleep-like state. They believed that the astral bodies of both the living (as visitors) and the dead travelled on the same astral plane and so the possibility existed that the two could meet. This was the goal of "flying."

This spirit flight was really a type of divinatory shamanism and is still practiced by many tribal healers such as modern-day shamans and medicine men. Samhain was thought to be one of the best times of the year to practice this type of divination. The boundaries between the world of the living and the world of the dead were thought to be at their weakest during this time. After the effects of the herbs wore off the visions the witches had would be interpreted for clues about what the future held.
Posted by SilentOwl at 9:08 AM

Email ThisBlogThis!Share to TwitterShare to FacebookShare to Pinterest
Labels: Superstition.