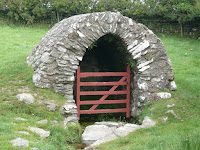 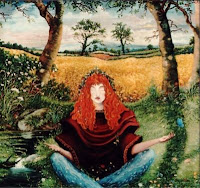 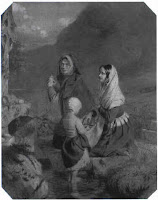 Since time immemorial, Irish people have firmly believed in the healing powers of sacred well waters. Special days were set aside to visit wells and leave gifts in appreciation. The wells were cleaned, generally cared for and the water channels kept clear to ensure the flow of water in and out of the well's basin. Carrying healing powers and blessings, the water flowed into the nearest streams and on to rivers and lakes so that all life forms dependant upon water could benefit.

The existence of holy wells in Ireland today offers an opportunity to witness sacred sites and rituals that have continued since prehistoric times. Where once a sacrifice may have taken place, today a bride might look into the waters for inspiration or good luck; a cripple might bathe in the waters in search of a cure. A ritual practice dating from prehistoric times and continuing today is that of circumambulation, or making structured rounds of the well, always in a clockwise direction (deiseal).

People visited the wells for their traditional virtues of healing and divination. If a physical cure was sought, the believer would drink or sometimes bathe in the water. In fact the water of some holy wells has indeed been found to contain curative properties, mostly due to the presence of certain minerals. However, the healing influence of the wells was due to more than their medicinal qualities. The well itself was viewed as a shrine dedicated to the miraculous emergence of living water, in all cultures a symbol of generation, purification, and the source of life itself.

People still make pilgrimages to the holy wells to seek relief for a variety of ills from rheumatism to scurvy, broken bones to leprosy. The link between water and fertility led to a number of wells gaining a reputation for curing childlessness. At the well, the petitioner would leave a token piece of clothing, usually hung on a bush or a tree so that the healing power of the well could act upon it.

Dreaming at holy wells was also used as a method of foretelling the future, possibly an echo of pagan times when, it seems, a female oracle presided over the well. This ancient practice was preserved down the years, albeit in a humbler manner, by the custom of country girls who would seek to know their future husband at the well. Hence it is the healing and wisdom of the Otherworld that has been sought by petitioners of the holy wells throughout the centuries.

In Ireland, pilgrimages to holy wells are still an important part of the year; and a high number of these fall upon the Celtic festivals of Imbolc on February 1st. Beltaine on May 1st, Lughnasa on August 1st and Samhain on November 1st. These are all special turning points of the year when the gates of the Otherworld are opened. Numerous holy wells are in fact dedicated to the Celtic goddess, Brigid and you will find many contain variants of her name.

There is still a strong instinct even today when stood near a well or on a bridge overlooking water to toss a coin into the depts., the “wishing well” if you like, or the tying of a rag to a tree in order to ask for a favour from the goddess. Rag Trees are another indication of the Druidic origin of Ireland’s sacred wells. Frequently a tree with magical properties – oak, holly, rowan or hazel – was planted beside the well to serve as its guardian. Hundreds of years later, the trees now tower over the water and supplicants still tie bits of cloth to the branches, trusting that as the fabric disintegrates so will their ailments diminish.

Christianity did not alter the people’s belief that the wells had healing powers. The great 19th-century Irish playwright J.M. Synge, while living in the Aran Islands, wrote Well of the Saints, a comedy based on accounts of miracles that occurred at Tobar an Ceathrar Alainn (Well of the Beautiful Saints), which is found on Innishmor just a few meters from a church dedicated to Saints Fursey, Brendan, Conal and Bearchan. In the play, Martin and Mary Doul, a blind beggar couple, believe themselves to be beautiful until a friar restores their sight with water from a holy well. No longer disabled, they discover they are not only common looking but now have to work for a living. When they become blind again and the friar attempts to restore their sight a second time, Martin knocks the holy well water to the ground, choosing blindness and a beggar’s life, having ‘seen’ enough human cruelty.
Posted by SilentOwl at 2:41 PM