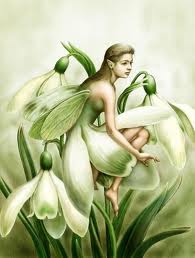 The legend of the Snowdrop.

Adam and Eve were kicked out of the Garden of Eden, a place where the sun shone every day, where they were warm and happy and had everything they could possibly wish for or want.  Unfortunately for them it was winter when they landed on earth, heavy rain, cold winds and dark grey skies. Eve spent every moment shivering, something she had never experienced before, she never needed to wear clothes, she didn’t even know what clothes were.  It was so cold that she felt as if her blood was beginning to freeze, and then the snow began to fall.

At first the snow looked so pretty but that soon wore off, the blizzards made her eyes sting, her face hurt, her fingers were going numb and her body began to freeze.  Eve fell into a deep despair, would this cold never end, would she ever feel the warmth of the sun upon her face, would she ever feel warm again? She fell to her knees and began to cry.

God hadn’t abandoned Adam and Eve completely, he had sent an angel to watch over them Upon seeing Eve kneeling in the snow in a state of deep despair sobbing her eyes out the angel asked her why she was so sad.  Eve told the angel that she despaired of ever feeling warm again, she had given up hope of ever seeing the sun, of ever being happy.

The angel reached down and picked up a snowflake, gently she breathed on it and let it fall back to the frozen ground.  Every time she did this the snowflake turned into a small flower as white as the snow upon which it fell until Eve was surrounded by a carpet of small pure white flowers.

“Why have you done this for me?” asked Eve,

The angel replied “To show you that winter will end, the flowers will bloom again and the sun will shine. This gift I give you is the gift of Hope”.

The flowers that the angel made became known as Snowdrop and they give us hope of a new spring, a new beginning, and new life.

So never give up for the sun will shine again tomorrow.

Email ThisBlogThis!Share to TwitterShare to FacebookShare to Pinterest
Labels: Folklore., Present day interest for me., Storytelling.