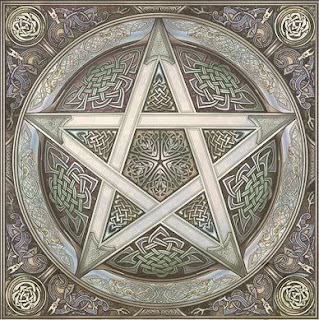 Someone asked me “What is the pentagram, what does it mean?” So I will attempt to explain my understanding of it.

To begin with I would advise you to forget all the Hollywood hype about good and evil associated with the symbol. The pentagram has to be one of the most misunderstood symbols in history, right up there with the swastika.  It has been used as a symbol by many of the world’s religions, Jews, Christian, and Pagan as a symbol of light and love. It actually dates back thousands of years to ancient Mesopotamia and is also found in ancient cultures including China, Egypt, Greece, and the Mayans to name just a few.

Today modern or neo-pagans such as Wiccans use the pentagram to represent some aspects of their belief, as they see it as representing spiritual life and knowledge.  The five points of the pentagram symbolise the four directions of north, east, south, and west, the fifth point represents sanctity of the spirit.  When put together it is a symbol of unity, wholeness, and knowledge.  The five points also represent the five elements, earth, fire, air, water, and spirit.

The symbol is said to have been the symbol of the goddess Kore whose sacred fruit is the apple and when you cut an apple in two you will find the pentagram enclosed within.  It is known as the Star of Knowledge. Kore was worshipped by the Coptic or Gnostic Christians, her festival was held yearly on January 6th and was adopted by the Christian church and renamed the Feast of Epiphany (Twelve Night).

It was also one of the Seven Seals mentioned in the Old Testament, an amulet that was said to represent the seven secret names of the Christian god. It was inscribed on King Solomon’s ring and it has been suggested that it also represented the five books of Pentateuch (The Torah).

In Ireland some suggest that the Celts believed that the pentagram was the symbol of the Morrigan, It was said that the five points represented the five great roads, the five provinces, and the five paths of law. I take this with a rather generous pinch of salt.

It was during the three hundred years of witch burning when the Christian church burned alive or hung thousands of innocent people accused of witchcraft, heresy, or devil worship that the pentagram took on a darker meaning.  It was then regarded as the sign of the goats head or the devil in the guise of Baphomet. A symbol of Light and Love was twisted by a group of bigoted evil men into a symbol of darkness and hate and they called it the Witches Foot.

The pentagram is used today within pagan or occult circles as a symbol of protection and power but it is not only pagan groups who use it.  Heavy metal rock groups use it, albeit for their own reasons (promotion); however that only shows how things evolve.  The five pointed star or endless knot as it is sometimes referred to, is also used as a symbol of power, authority, and bravery in many other areas.  Police badges in many countries use the pentagram, military vehicles, flags of various countries, and medals presented for acts of bravery, courage, and honour.
It is used by many companies on their logos, advertising, and graphic design. The pentagram is universal, not exclusive to any one group, nation, or religion. It simply represents what the wearer or user wants it to represent. Not good, not evil.  As for the inverted pentagram representing witchcraft and by association Satanism, well forgive me while I yawn......As I said right at the beginning of this post forget all the rubbish you have heard, read, or seen emanating from Hollywood and other rather dubious sources.

Satanism has absolutely nothing whatsoever to do with witchcraft, Wicca, or paganism.  Satanism is a branch of Christianity no matter how much some would like to deny it, and the inverted pentagram?, you will find it upon many Christian churches, why not have a look; you may be surprised at what you find.

I hope that I have made things a little clearer for those of you who may be interested.  If I have made any errors then I apologise and as I’ve said before “I always appreciate feedback”.

We have come a long way since the Spanish inquisition of 1480 and the European witch burnings and hangings of c1450-1750. May the wheel keep turning.

Email ThisBlogThis!Share to TwitterShare to FacebookShare to Pinterest
Labels: Folklore and Paganism., Present day interest for me.