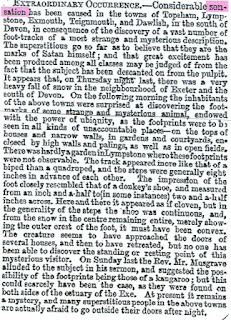 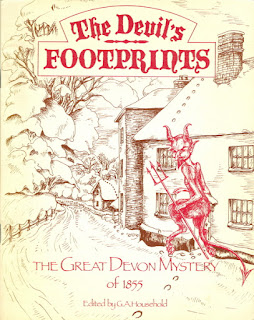 This is not Irish folklore but I found it rather interesting so I thought I'd share it with you. Hope you like it.

One of the strangest things ever to happen in England took place on the night of the 8th February 1855.  During the night, heavy snowfall blanketed the countryside and small villages of Southern and Eastern Devon., around the Exe Estuary.  In their houses, people huddled beneath their bedclothes on a night of intense cold.  Slowly the first light of dawn came to reveal a frozen landscape-and the footprints.

To the astonishment of all, when people left their houses they found thousands of mystery footsteps.  These were in the shape of a cloven hoof, but they moved in single file.  More astonishingly was the fact that they covered a distance of over a hundred miles and went through fields, gardens, towns, and even over rooftops, they even entered and exited various drain pipes as small as four inches in diameter.  The footprints measured around four inches long and three inches across and were between eight and sixteen inches apart. They were in single file
.
At first people were intrigued, but then they became frightened.  The news spread rapidly over the country and many people believed the footprints belonged to the devil. There were reported sightings of a “devil like figure” in the area and search parties were sent out but to no avail.

The London newspapers published the story and experts came to study the footprints, before the snow melted. Nobody could offer an explanation for the mystery, although various theories ranging from an escaped kangaroo to hopping mice and some of these were printed in The Illustrated London News, March 1855.

Some false rumours concerning the sighting were spread by the clergy hoping to address the concerns of their parishioners regarding the visit from the devil. It has even been suggested that the local clergy started the devil rumour in the first place saying that the devil was roaming the countryside looking for sinners. Great way to fill the church on a Sunday.

Could the tracks have been made by a badger as it places its back feet in the same tracks left by its front. This could account for people mistaking the tracks as those belonging to a biped. Or did the dark lord really walk the Devon night?  I suppose we’ll never know. I’ll leave you to decide.

Email ThisBlogThis!Share to TwitterShare to FacebookShare to Pinterest
Labels: Folklore and Superstition., Present day interest for me.