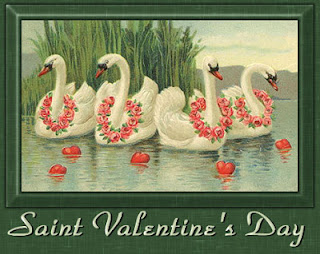 Valentine’s day traditions.
Another day of celebration introduced into Ireland through Christianity.

The flower called snowdrop first appears in February and is considered a symbol of hope.  According to legend, the snowdrop became the symbol of hope when Adam and Eve were expelled from the Garden of Eden.  When Eve was about to give up hope that the cold winters would never end, an angel appeared.  She transformed the snowflakes into flowers, so proving that the winters do eventually give way to spring.
Valentine’s day was traditionally the day when birds picked their mate and for this reason it became known as ‘the birds wedding day’. In some countries it is known as the first day of spring and the day that workers return to the fields.

February along with January first appeared on the Roman calendar when the calendar was extended from ten months to twelve. The word February comes from Februa-which means cleansing or purification, and reflects the rituals carried out at spring.

The tradition of Valentine’s day is thought to have originated from pagan customs in Ancient Rome. Festivals of purification and fertility were celebrated between the 13th and 18th February. These festivals were dedicated to peace, love, and household goods and involved animal sacrifices to mark a young man’s rite of passage. February 14th was known as Lupercalia...a day dedicated to Juno-Lupa, the She-Wolf.  Vestal virgins would make a sacrifice of a goat and smear the blood onto the foreheads of youths of noble birth.
The youths, clad only in a goat skin thong would then lead revellers known as Luperci on a procession through the fields using a strip of goatskin called a Februa to whip the crops to ensure fertility. Women would be gently lashed using the goatskin strip in order to make them fertile, even those known to be barren.  This act was known as Februatio.  Both Februatio and Februa come from the Latin meaning “to purify”, the naming of the month of February is thought to have its origin from the same source.

One of the festivals celebrated at this time was dedicated to Juno Februata, the Roman goddess of women and marriage. During this time the names of willing young women were placed into a box and drawn by the young, unmarried men. The man and women were matched for a year, which began in March and it was not unusual for the pair to remain together after the year had ended.

With the advent of Christianity these pagan practices couldn’t be allowed to continue so the clergy attempted to stop them. It wasn’t going to be that easy so as we have seen with many other pagan celebrations and festivals the church decided if you can’t beat them. Join them.  The church simply created its own holiday around the same date and selected a saint that was remembered for his devotion to love.

In AD 496 Pope Gelasius banned the pagan festival of Lupercalia but he kept the Juno Februata lottery. He replaced the drawing of unmarried girls names with those of saint’s. He then ordered that both the young men and girls draw a name from the box.  During the year that followed they were expected to emulate the life of the saint whose name they had drawn.

This may have satisfied the church but the young Roman males still needed to meet nice young Roman females so they simply thought up another custom. They began to offer handwritten greetings of affection on February 14th.
Of course this is only one suggestion for the origin of Valentine’s day, there are others.

During the medieval era of chivalry, the names of English maidens and bachelors were put into boxes and drawn out in pairs. Each couple exchanged gifts and the girl became the man's sweetheart for a year. He wore her name on his sleeve and was bound by duty to attend and protect her (the accepted origin of the phrase, "to wear one's heart on one's sleeve"). This old custom of drawing names was considered a good omen for love and often foretold a wedding. In 1537, King Henry VIII declared, by Royal Charter, that all England would celebrate February 14 as "Saint Valentine's Day" and with the passage of time, February 14 became the traditional date for exchanging love messages and simple gifts (such as flowers or candy), with Saint Valentine becoming the accepted Patron Saint of Lovers.
Or

Under the rule of Emperor Claudius II, Rome was involved in many bloody and unpopular campaigns. Claudius the Cruel was having a difficult time getting soldiers to join his military leagues. He believed that the reason was that roman men did not want to leave their loves or families. As a result, Claudius cancelled all marriages and engagements in Rome. Claudius had also ordered all Romans to worship the state religion’s idols, and he had made it a crime punishable by death to associate with Christians. However, Valentinus was dedicated to the ideals of Christ, and not even the threat of death could keep him from practicing his beliefs. Valentine and Saint Marius aided the Christian martyrs and secretly married couples, and for this kind deed Valentine was apprehended and dragged before the Prefect of Rome, who condemned him to be beaten to death with clubs and to have his head cut off. He suffered martyrdom on the 14th day of February, in either 269 or 270.

Historical archives make mention of at least three different individuals (and perhaps as many as seven) credited with the name of Saint Valentine (or Valentinus).  There may not be any definitive written accounts of which Valentine is the one celebrated by people today, in actuality there may even have been different cults in various places. They may even have celebrated the same person but over the years they have become mixed up with each other as so often happens with stories written down and then re-told.

There is an Irish connection. In 1836, Pope Gregory XVI sent a gift to the Carmelite church in Dublin.  The gift was a relic of a Christian martyr, a small gold casket containing the remains of one Saint Valentine. Every year the casket is carried in solemn procession to the high altar for a special mass dedicated to young people and all those in love.  However, as with all things there is now a dispute between the church in Dublin (Carmelite) and another church in Glasgow (Franciscan), which also claims to have the original remains.  To make matters worse, a similar claim has now been made by the Basillica at Terni, at Terni, in Italy.

To confuse things even more, there has now been speculation in recent times that the name Valentine was originally “Galantine” signifying “Gallant”.  It has been suggested that the Medieval French peasants prounounced the letter ‘G’ as a ‘V’.  Why do the French always get the blame???

All I can say is whether pagan or Christian, we can all celebrate the true meaning of love by giving each other the gift of understanding, togetherness, and laughter.  A box of chocolates and a bottle of wine wouldn’t go amiss though.

Posted by SilentOwl at 4:06 AM

Email ThisBlogThis!Share to TwitterShare to FacebookShare to Pinterest
Labels: folklore, Present day interest for me.