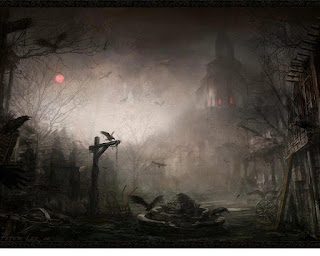 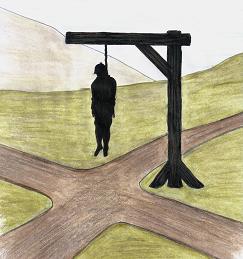 Crossroads have played a very important role in the folklore of many cultures. They were often used as burial places for unbaptised children, murderers, executed criminals, and suicides.  It was believed that the crossroads would confound or confuse restless spirits and stop them from returning to haunt the living. It was because this ground was unconsecrated and was seen as separate from the everyday world. Such outcasts were not intended for the forgiveness of heaven and so they were buried in a place that would condemn their spirits to wander for eternity. It was suggested that this was because the crossroads form a Christian cross but this does not hold true as the belief in the power of crossroads predates Christianity and you will find similar superstitions regarding crossroads in many cultures which are not Christian.

May be it was for this reason that crossroads have become associated with ghostly legends, magic, and paranormal activities.  They have long been of interest to those who gather information on the paranormal as events of this nature are said to occur on ancient highways and byways especially where they cross.  Whether or not these events are real or imagined does not matter as there are stories in every culture concerning devils, demons and deals done with the devil so I would suggest that there may just be a grain of truth in their origins.  There was once a tradition of putting wooden crosses on bushes by the roadside where the roads met at a crossroads and if a funeral procession passed by then the pall bearers would place the coffin down for a few minutes.  Crowing hens, regarded as unlucky, were abandoned at the crossroads. If you had warts these could be cured by rubbing them with a stone and leaving it at the crossroads, if someone picked up the stone then they took over your warts.  There are stories concerning deals done with the devil, in modern times Robert Johnson the famous blues musician claimed to have met the devil at the crossroads and signed over his soul to play the blues and gain mastery over the guitar. He died at the age of 27 and became one of those poor unfortunates that have become known as members of the 27 club. I have written a post about the 27 club if you wish to know more.

In Ireland the sweeping of crossroads was carried out, this was a practice associated with witches who would meet at crossroads to carry out certain rituals.  Traditionally the crossroads was looked upon as a no-man’s land belonging to no one. A place that was thought of as being neither here nor there, a place beyond the real world where normal rules did not apply.  It was here that people could make contact with the spirit world and shrines, crosses and standing stones are a common feature of crossroads throughout Europe.  At Samhain spirits were thought to gather and walk in procession to visit the homes of their relatives and that if you were to stand at the crossroads at midnight you would see them passing.  Some legends even suggest that if you were to listen carefully you would hear the names of those about to die on the wind as it blew across the feet of the corpses on the way to the house of the one whose name was heard.

Gibbets were often placed at crossroads. A gibbet is an instrument of public execution; it is in this instance, a gallows-type structure from which the dead or dying bodies of executed criminals were hung on public display in order to deter others from following their way of life.  At one time live gibbeting took place; the condemned were placed in a cage like structure that hung from the arm of the gibbet. They were left to die of thirst.  This type of execution seemed to be reserved for those convicted of treason, murder, highwaymen, pirates and sheep stealers.  It may be of interest to know that Oliver Cromwell was gibbeted after his death, when monarchists disinterred his body during the restoration of the British monarchy.  The practice of burying suicides and criminals at crossroads was repealed by an Act of Parliament in 1823.  It has been suggested that this was at the request of George IV who had been delayed by a crowd gathered for a burial at the crossroads of Hobart Place and Grosvenor Place. The spectators were watching the burial of a suicide called Abel Griffiths, by this time suicide was regarded with greater sympathy and although frowned upon by the church the populace now didn’t consider it to be self-murder. However, following abolition suicides could only be buried in graveyards between 9-00pm and midnight and no ceremonies were allowed.

There is a sad story concerning a crossroads on the Icknield Way near the Cambridgeshire and Suffolk border in England I mention this only because Ireland was under British rule and so their laws were imposed upon us and this story is now part of the folklore of crossroads.  There is a neatly tended patch of ground where flowers are planted and looked after.  It is known locally as The Boy’s Grave.  Folklore tells us that a young shepherd boy believed he had lost one of his master’s sheep, afraid of being accused of its theft and hanged or transported and the shame that may bring to his family he hanged himself. When the sheep were counted it was found that none were missing. Having taken his own life he was buried at the crossroads, people tend to his grave to this day.  His name is not known nor is his death mentioned in local records.  However, through archaeology and historical research the burial of criminals and suicides at rural crossroads illustrates the practice and there is now a great deal of evidence to support the theory.
A more pleasant feature of Irish country life was the custom of holding dances at the crossroads. People dance on specially erected timber platforms and enjoy the open air, scenery, meeting friends and making new ones and enjoying the music provided. It was during the 16th and 17th centuries that crossroads dancing became popular. However, the clergy condemned it so the Gaelic League introduced the first Ceilli in 1697 and this let dancers dance indoors under supervision.  Interestingly the Ceilli was not held in Ireland but in London.  Traditional Irish culture continued in secret until the 1700s. It was a time in Irish history when dancing was prohibited by the English so the Irish would meet on country roads, particularly where they crossed.  They would bring food, drink, and musical instruments and keeping an eye out for approaching soldiers they danced their country dances. It was around 1750 that attitudes began to become less strict and this allowed Irish dance to flourish.  There used to be a tradition where dance was taught by the Dance Master, a Dance Master would travel around the country staying in villages in order to
teach dance steps. To have a Dance Master staying in your village was a cause of immense pride and boasting by the community
.
However, we cannot blame the British for the Public Dance Hall Act of 1935.  This little piece of legislation enacted by the Irish Dáil had a severe and detrimental effect on the traditional music, dance, and storytelling of rural Ireland.  Before this legislation Irish culture was an important part of rural Ireland and centred on house dancing and dancing at the crossroads.  It was here that our art flourished, but along came the pressure to regulate.  This came from a number of different sources, most notable among them was the Catholic Church. They had been campaigning for years claiming that house dancing led to sin and corruption, here now was a chance for the government to bring in legislation and tax the profits of regulated dance halls.  It now meant that all dance halls had to be licensed for public dances, however, house dances could not be regulated and so they were exempt. The view of the Gardaí and the clergy was that such dances should be illegal this led to a great number of local people being prosecuted and the dancing in houses and at crossroads began to die out, and with them went our traditional way of life.  Even farmers stopped holding harvest dances as a way of thanking their farmhands for all their hard work gathering in the crops.

The house dances and crossroads dances were not the target of the legislation.  Nevertheless, the clergy and Gardaí continued to apply the act as if it did outlaw these activities, and although they were not the only factors in the demise of the country dances, they were at any rate the only agents of change who consciously and deliberately set out to do away with our traditions.  The Act was not to blame, but its agents, encouraged and assisted by the clergy, certainly were.

It is good to see that today the house dances and dancing at the crossroads are being revived. We no longer look for approaching soldiers, only motor cars.

Incidentally the phrase “Comely maidens dancing at the crossroads” was never in fact uttered by DeVelera as some would have you believe.