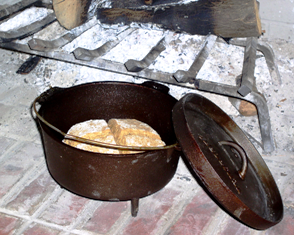 The History of Irish Soda Bread.


If you thought that soda bread was Irish then you would be wrong. It appears that honour belongs to the First Nation Indians on the American continent who used soda ash in baking their bread. Now we have made it our own and it has become known as Irish Soda Bread. This turn of events was brought about by poverty for the use of soft wheat flour and bicarbonate of soda was ideal for making what was then known as ‘Quick bread’ getting it to the table a lot faster than yeast based bread. In1908 2/3rds of the flour used in Ireland was soft wheat from the U.S. 90% of the flour used in Belfast and 80% of the flour used in Dublin was soft wheat
In 1850 it was reported that during the failure of the potato a large amount of bicarbonate of soda was used by the poor in the preparation of bread. This resulted in a shortage of bicarbonate of soda and unscrupulous dealers rose their prices accordingly. Crooked dealers also sold substitutes for bicarbonate of soda that caused many deaths.


In 1835 pre-packed ‘Royal Baking Powder’ was introduced. This combined bicarbonate of soda with cream of tartar to create the acid/alkali combination resulting in the release of carbon dioxide gas this in turn causes the bread to rise. It was introduced in baking around 1840, how it was first introduced is still unsure.
Sour milk was used in the making of soda bread in Ireland in the early years, a great way of using up something that would be normally thrown out.  However, buttermilk is used today. If you wish you can now buy a buttermilk powder that you just add to water.


Before baking your loaf, cut a cross on the top with a sharp knife. This is said to ward off the devil and protect the household , in reality it allows the bread to heat right through.  The shape of the loaf can differ depending on where you live. In the Southern part of Ireland it is shaped and baked as a round loaf with the cross marked on the top. In the Northern part of the Island it is flattened into a round disc and then divided into four equal triangular shapes. Each is then cooked on a flat griddle.
Bread making formed an important part of daily life within an Irish household. Most families lived in isolated farmhouses and with kitchens that had an open fireplace and no oven. Bread was baked on griddles or three legged black iron pots (Dutch ovens), hung on a crane over a turf fire. Due to the fact that the pot had three legs you could place it directly onto the hot embers, place a few hot embers onto its lid and here it would bake. You ended up with a lovely loaf that was tender and dense with a hard crust and a sour, tangy taste.


In our house n south Mayo soda bread was called farl, (pronounced farel).  The word derives from the Gaelic Fardel which literally means ‘four parts’ and this refers to the way you cut the cross into the top and when the bread is cut into four quarters when baked.
When the bread has been cooked it is wrapped in a clean tea towel until it has cooled down and this keeps the crust soft. Unless of course you eat it straight away. All that’s left to add is fresh butter, jam, and a nice mug of tea. On a cold spring equinox day like today, freezing wind and biting cold rain. A nice slice of farl with a hot mug of tea is just right. Keep smiling and don't forget the jam.

Posted by SilentOwl at 3:47 PM

Email ThisBlogThis!Share to TwitterShare to FacebookShare to Pinterest
Labels: Folklore and food., Present day interest for me.