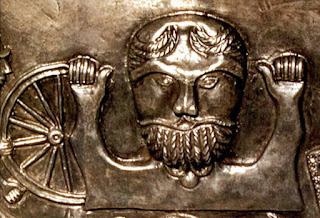 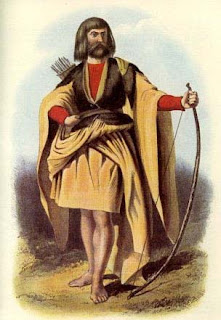 
The Celts tribal system was very sophisticated. Chieftains and leaders were elected and women had an equality of rights. Women could inherit and own their own property; they could be elected to office and could lead a tribe even in times of war. The word “Celt” was introduced by Greek and Roman writers who used it to refer to the tribes that occupied Europe to the north and west of them. When the Greeks encountered these peoples they called them “Keltoi” or “Galatai”. Keltoi meaning either “the hidden people” or “those who are strange”. There are many theories as to the origin of the names, the Indo-European word “Quel” means elevated or raised, and it has been suggested that the word “Celt” is derived from this as some people believed that the Celts had a higher spiritual belief. The word “Gala” is a Greek word meaning “milk” and this may have referred to our white complexion. Who can really know the truth of these things?

The Celts flourished as a civilization until they were subjugated by the Roman Empire. Maybe this was because they were fiercely independent of each other. They were lovers of freedom and equality and so were not bound by a central authority. The Celts were not united in the conventional way that would be understood today, what united the tribes were not borders but a culture and spiritual belief system. With the coming of an organised military and the new religion of Christianity the way of life for the Celts was doomed.

The degree to which any people can be judged to be civilized can be measured by how it treats its women, children and weaker more vulnerable members of its society. The level of respect, care and honour it bestows on its members reflects this and in this the Celts were truly civilized. The Romans and the Christians on the other hand viewed women as objects of pleasure and child-bearers and certainly not as equals.

Our religion was based on ethics, nature and knowledge and the belief in transmigration of the spirit (reincarnation). The Celts believed in the cyclical nature of existence and were initially worshippers of the goddess (The Creative Principal). The woodlands, rivers and lakes were our churches, a grove of trees rather than the confines of a man-made structure.

In many ways the Celts and the North American Indian tribal systems were similar, they both lived in scattered tribal units joining together at certain times for specific reasons such as trade or ritual ceremonies. Both cultures practiced an indigenous earth-centred spirituality that had many animalistic beliefs, both had a deep respect for the land and nature, the ancestors and the spirits of the land, and both cultures were to suffer at the hands of an organised military invader and the enforced views of an alien religion. Eventually the Celts were defeated, absorbed into the invading forces or pushed westwards again mirroring the Native American.

Barry Fell (deceased) a former Harvard professor suggested a link between the Celts and the North American Indian, his research into ancient inscriptions found on stones discovered in an archaeological dig in New England identified them as Ogham, a system used by the Celts thousands of years ago. Over 200 hundred stone chambers have been discovered and pottery, tools and artefacts together with a study of local place names and Indian words suggest Celtic roots.

David H. Kelley, an archaeologist at the University of Calgary who is credited with a major breakthrough in the decipherment of Mayan glyphs, complained about Fell in a 1990 essay: Referring to Fell's work, he stated that there were many inadequacies. However, in the same essay he went on to say "I have no personal doubts that some of the inscriptions which have been reported are genuine Celtic ogham." His conclusion stated "Despite my occasional harsh criticism of Fell's treatment of individual inscriptions, it should be recognized that without Fell's work there would be no (North American) ogham problem to perplex us. We need to ask not only what Fell has done wrong in his epigraphy, but also where we have gone wrong as archaeologists in not recognizing such an extensive European presence in the New World."

I have often considered the question “How did two proud cultures end up on their knees” so to speak. I think of the ‘Trail of Tears’ and ‘The Famine Walk’ and how both were forced to conform to the invader, I think of the slaughter and enslavement of two proud nations, the starvation and theft of land and I see many comparisons. I see the W.A.S.P.s and I see the Clan of The Round Collar.

The flag is a collage of the flags of the six Celtic nations (clockwise from upper left): Brittany, Isle of Man, Scotland, Wales, Cornwall

Posted by SilentOwl at 1:36 PM