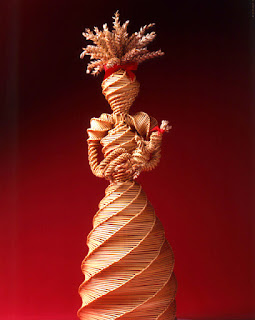 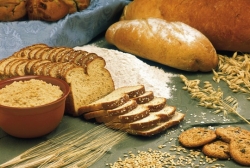 
Lughnasadh is the beginning of the harvest season, also known as The harvest of the first fruits’ (Anglo-Saxon), and the time of the funeral games of the Celtic goddess Tailtiu. Tailtiu died clearing a forest so that the land could be cultivated. As she lay on her death bed she spoke to those that had gathered around her. She asked that funeral games be instituted in her honour and that her foster son Lugh should lead the games.

Tailtiu prophesied that as long as the games were held Ireland would be known for its song. Tailtiu gave her name to Teltown, County Meath, and it was there that the festival of Lughnasadh was traditionally held, eventually evolving into a huge tribal gathering. It was here that the High King presided over legal agreements, disputes and political problems of the day. It was also here that athletes competed against each other, artists and entertainers showed off their talents and traders gathered to sell their wares. Another important ritual that was to take place was that of ‘Handfasting’ where couples would be joined together for a year and a day, if all went well then it would become a permanent arrangement and if not they would return the following year to separate.

Throughout the centuries we have celebrated the harvest and we still continue to do so. Lughnasadh has been given additional names over the years, here in our corner of County Mayo it is also known as Reek Sunday or Garland Sunday and people climb our local mountain Croagh Patrick (known locally as the ‘Reek’). In some areas it is known as ‘Bilberry Sunday’ again celebrations include climbing a local hill or mountain. Some will call it Lammas (Anglo-Saxon).

In some parts of Ireland the nearest Sunday to Lughnasadh was known as Cally Sunday. It was the traditional day to lift the first new potatoes. The man of the house would dig the first stalk while the woman of the house would wear a new white apron and cook them, covering the kitchen floor with green rushes in their honour. The family would give thanks that the 'Hungry Month' of July was over and the harvest had begun. Though initially the custom of first fruits usually applied to grain, in later days, when grain crops were the province of large landowners, common people had no grain of their own to offer. The first fruits custom was then transferred to potatoes, an offering available to everyone with a patch of ground, and widely grown as a subsistence crop. Cally is a mixture of potato mashed together with butter, milk and sliced onion.

Lughnasadh was also a time when people would visit sacred/holy wells and leave offerings and by visiting the hilltops and the wells you were celebrating both the summit and the depths of the earth. Another name that is used for Lughnasadh gatherings is ‘Wake Fairs’, in Ireland a wake is the time spent keeping the body of someone that has died company until it has been buried. It is a time to celebrate the person’s life and we have food, drink and tobacco. We tell stories of their life and some may be very funny. One way we celebrate Lughnasadh is by having a wake for the corn god and we place a symbol of the corn god in the field after harvest. The offering/symbol is usually in the shape of a corn dolly. Before Christianity took hold in Ireland (and even afterwards) within the traditional pagan agricultural culture it was believed that the spirit of the corn lived amongst the crop, and that when the crop was harvested it was made effectively homeless. The people believed a spirit lived in the field and as they cut the harvest the spirit retreated before them. The last bunch of corn was kept and given to the oldest man to plait and keep it on the wall until the following year's crop was sewn when the spirit would be returned to the field by being shaken from last year’s corn bunch.

Corn Dolly making is an ancient craft going back thousands of years, when as previously stated, it was thought that a spirit lived in the cornfields. To preserve this spirit at harvest time, and ensure the success of next year's harvest, a corn dolly was made for it to rest in. Ivy was a symbol of rebirth, and so it wasn't uncommon to dress the corn doll with a headdress of ivy. The Corn Dolly was originally made to appease the corn spirit with the hope of a good harvest the following year. Traces of corn dolly shapes have been found dating back to 2000 B.C. and it has always been the tradition to plough the previous year’s dolly back into the field the following year.

We will celebrate Lughnasadh by holding our ritual followed by feasting on the foods of the harvest and a few drinks. We will have music, song and maybe a story or two. However you choose to celebrate your Lughnasadh, may your harvest be a fruitful one, may the sun shine for you and may you reap the rewards you deserve for all your hard work.

Keep smiling and blessings of Lugh to you all.
Posted by SilentOwl at 6:09 AM