The House of Mystery. 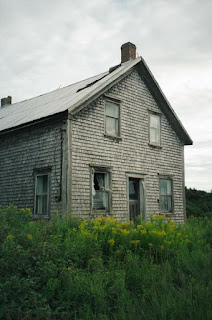 The House of Mystery.


There is a lovely rustic house on the banks of the River Shannon in Baile An Taibhse a small rural village in County Clare. It is shown on records as far back as 1715. It was previously owned by the McDermott family until 1975 and was said to have had a tragic and sordid history whilst under their ownership. Was it this history that some say caused it to have been possessed by evil forces?

In the year 1975 a good, gentle man called John Murphy killed his entire family and then in desperation killed himself. Was it murder-suicide or was there some other darker force at work?

John Murphy was not a local man but those who knew him did not believe him capable of such horrific crimes. When the last remaining member of the McDermott family had died the house had been placed on the market but due to its dark history there was no local interest. However, it was seen by John Murphy who yearned for a simpler life and bought by him in 1975. He was at the time living in England and as soon as the papers were signed he, his wife and three children relocated. As a painter he was able to work from home, setting up a studio in one of the out buildings. May of 1975 was for the time being a happy time.

They say John had an interest in the supernatural and that he began to research the history of the house. Was it this interest that set the wheels in motion? His mental health began to suffer, he began to hear voices and he became paranoid suffering from feelings of persecution. His family became withdrawn and isolated; they refused to talk with their neighbours deciding instead to remain indoors as much as possible.

It was round the middle of November when it happened. John had a huge row with some of the locals, the reasons are lost in time. He stormed off and went home, later that night and for the next two nights passerby’s said they heard raised voices, yelling, angry voices, and then....

The police called at the house, receiving no answer they forced an entry, what they found caused some of the officers to become violently sick....It was a terrible sight. Dressed only in their nightclothes, Yvonne (the wife) and the three children (Claire, age 8; Anne, age 5; and Sabrina; age 4) were brutally murdered. Yvonne’s throat had been slit; a later autopsy indicated that this had been done after death. All the children had knife wounds. To make matters worse all four bodies had been propped up against the wall in a sitting position, eyes wide open, staring up at the ceiling where John Murphy was hanging from an electrical cord tied to a wooden beam. He was covered in blood.

Yvonne and the children had been murdered in their own bedrooms and their bodies moved to the room in which they were found by the police. Above each of these four victims was a message, written in their own blood. The murder weapon turned out to belong to John Murphy and the police decided that it was an open and shut case. One of murder and suicide. Case closed.

However, unless John had superhuman powers how did he get up to the ceiling? No ladder was present, no chair, no way he could have possibly have lifted himself up never mind tie the cord round his neck. Even so, he was a quiet man, non-violent. Had he become mentally ill and finally cracked? Had evil forces made him mentally ill? Was he under some demonic possession from the house? How did he end up hanging from the beam? Did some evil force kill him once he had carried out the murders? So many unanswered questions. None of the locals will talk about the house even now. It is known that John had argued with some of the locals just before the murders, were they the victims of some horrific crime and cover-up. The house and its reputation conveniently perpetuating folklore and keeping the truth hidden.

Some years later, the mystery of the house and the tragic events were still generating a lot of interest, in fact it had become quite infamous, so much so that a group of young people decided they would carry out their own investigation. They planned to break into the now boarded up house and spend a few nights there to see what they could discover. At first all went well, they set up the equipment they had bought in order to assist them in their endeavours and they settled down for the night. Some locals reported hearing angry voices, raised voices quarrelling, just like before. Of course no one realised that there was anyone in the house, they just thought it was the sounds of the house and its history and hurried pass.

Eventually, worried that no communication had been received from any of the young people their families decided to gain access to the house. The equipment was still running and there was even music playing on the radio. The young people, however, were nowhere to be found. They had simply vanished without trace.

Had the house claimed more victims? Did the evil forces within the walls of the house drive them away, if so where were they? Had they been murdered because they had discovered the secret of the previous killings? Again so many unanswered questions.

We may never know the truth, the truth lies buried within the walls of the house and the house remains silent. Some say as you walk past on a lonely winters evening you can hear moaning coming from the house. Or is it just the wind. I’ll let you decide. Sleep well.

Hope you enjoyed this ficticious story (or is it?).