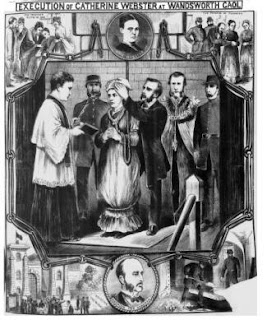 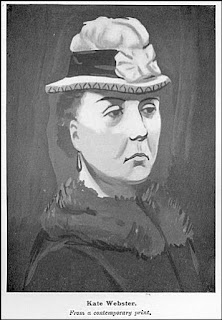 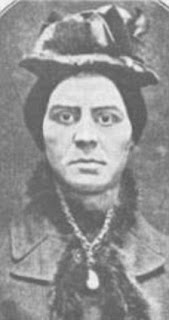 I’m putting this post up because it concerns an Irish woman in Victorian England, I found it to be quite interesting.

A skull identified as that of a murder victim from sometime in the late 19th century has been unearthed by workmen in the backyard of naturalist David Attenborough’s south west London home. It has been suggested that it is the skull of Julia Martha Thomas, age 55, who died in 1855. However, it is the circumstances of her death rather than the discovery of her skull that is of interest to this blog as it concerns an Irish woman whose name was Kate Webster.

The Bowl of Lard.

On the 13th January 1879 Julia Martha Thomas of No. 2 Vine Cottages, Park Road, Richmond Hill. The number thirteen has long been considered unlucky by some and for Mrs Thomas it certainly appeared so for it was on this day she would make a mistake that would ultimately cost her life. She took into her employ a maid, but unknown to her this maid was a convicted thief, fraudster and all round nasty piece of work by the name of Kate Walker. An ex con just released and on the lookout for easy pickings. Unluckily for Mrs Thomas, Kate Walker had turned down a job because; as she said later “There weren’t anything worth nicking”

Now, at first, the two women got on rather well but this did not last for Kate Walker had no intention of working hard and her sloppiness annoyed Mrs Thomas. Walker was a heavy drinker and threatening, intimidating Mrs Thomas by her aggressive manner and on the 28th February Mrs Thomas plucked up her courage and sacked her. Unfortunately Mrs Thomas was a kind old soul and Kate Walker preyed on this, she asked would she be allowed to stay on for a couple of days to give her some chance of finding other employment elsewhere. Sadly for Mrs Thomas, she agreed.

On the evening of Sunday the 2nd of March 1879, Mrs Thomas went to church as usual but was seen to leave the service early in an agitated state. This was to be the last time that Julia Martha Thomas was seen alive. The following Tuesday afternoon Kate Webster went to see some friends; she was seen wearing a very smart silk dress of some value, and carrying a heavy looking Gladstone bag. She mentioned to her friends that she had come into some property, her aunt, having died had left her a house complete with contents and she asked them if they had any contacts that could help with its disposal. Her friends (called Porter), asked Kate if they could have a private talk as they considered her request and so Kate went for a walk, taking the Gladstone bag with her. After a time she returned but without the Gladstone bag and later that evening the Porter’s son, Robert, was to help Kate carry a heavy box down to Richmond Bridge, she explained to Robert that someone was meeting her there and taking the box from her but later on when questioned he was to say”as I walked away I heard a loud splash as if something heavy had hit the water”

The following day, a coalman recovered the box from the Thames and thinking himself lucky imagine his horror when breaking it open he found bits of what was later identified as ‘parts of a female body’, apparently boiled. Unfortunately, the head was missing so it was impossible for the police of the time to take the case any further (Pre D.N.A.). It became know by both the police and the press as ‘The Barnes Mystery’.

Kate Webster was now walking around the streets of south west London wearing the late Mrs Thomas’s clothes and jewellery and was even calling herself “Mrs Thomas” and it was under this name that she persuaded a general dealer to buy the contents of No 2 Vine Cottages. Now she had some money in her pocket she went on a cruise up the river, enjoying her new found wealth, unaware that the noose was beginning to tighten around her neck.

Remember Robert Porter, the young man who helped Kate Walker carry the box down to the bridge? Well he was also an avid reader of gruesome murder stories in the newspapers. He mentioned to his father Henry Potter, (No, not Harry), that the box described in the “Barnes Mystery” was the same box that he had helped Kate Webster with, the one he heard drop into the Thames. At the same time the general dealer that had bought the contents of No 2 Vine Cottages was looking through said contents and came across a dress that had inside one of the pockets a letter addressed to a Mr Menhennick, an acquaintance of the real Mrs Thomas. The dealer became suspicious and so he and Mr Potter paid Mr Menhennick a visit. After discussing the various coincidences they came to the conclusion that the body in the box may well be Mrs Thomas.

They went to the police and after explaining their suspicions the police came to the same conclusion, enough to convince them to carry out a search of No 2 Vine Cottages. They were to find an axe and a large copper tub that contained fatty acids that suggested Mrs Thomas had been battered to death, chopped into pieces and then boiled down, anything that was left went into the box and the Gladstone bag. An arrest warrant was issued and before long Kate Webster was apprehended, taken to Richmond Police Station and charged with murder. Of course she denied it, she even went as far as accusing Henry Porter and the General Dealer (Mr John Church) of the crime but it carried no weight.

She was tried at the Old Bailey and on the 8th July 1879. The police officer in charge of the case, Detective Inspector David Bolton outlined the events as he found them to the coroner, “Realizing she had injured her she proceeded to strangle her to stop her from screaming and getting her in trouble. Webster decided to do away with the body and used a razor to chop off the head. Having decapitated her she used a razor, a meat saw and a carving knife to cut the body up, the dismembered body was put into a copper laundry vessel and she proceeded to boil up the body parts of Thomas,” he said.

Kate Walker was found guilty of the murder of Julia Martha Thomas. She was hanged by William Marwood on the 29th July 1879 at Wandsworth Prison; she was the only woman to ever hang there. It is reported that her last words were “Lord, have mercy upon me”

There is one last twist to the story, after the execution the Victorian commentator Mr Henry Mayhew met a boy who knew Kate Webster. A few days after she had murdered Mrs Thomas she had offered the boy and some of his friends a free meal with these words:

“Ear you lot, I’ve some lovely pig’s lard ‘ere, you kids can have it free of charge, don’t go saying that Kate Webster never gives you nothing.

He said she then gave them two big bowls of lard and hunks of bread.

“Eat it all up now me dears its awful good for you, and when you’ve finished lick the bowls and sell them, you’ll get a copper or two for them.

Now I’m not suggesting what was in the bowls but I’ll bet it was full of body.

More than a century after the murder the West London Coroner, Alison Thompson formally acknowledged the skull found as that of Julia Martha Thomas. Police were able to provide conclusive evidence proving that the skull was that off the victim. Julia Martha Thomas and the “Barnes Mystery” case can now be laid to rest.
Posted by SilentOwl at 1:55 PM