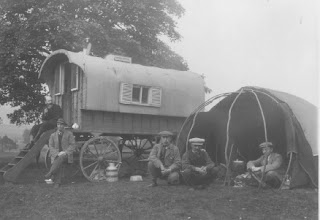 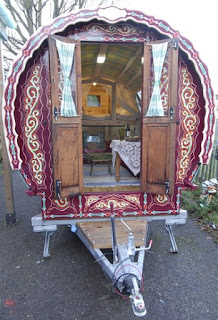 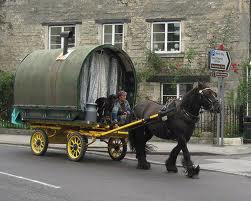 
It was the right of the wife that the husband should provide the living quarters and this was normally a bell shaped tent that had a hole in the top for a chimney. These types of dwellings were traditionally known as 'Benders'. A bender tent is a simple shelter used by the Irish Travellers before the travelling wagons and then alongside the wagons when they were introduced in the 1850s. A bender is made using flexible branches or withies, such as those of hazel or willow. These are lodged in the ground, then bent and woven together to form a strong dome-shape. The dome is then covered using any tarpaulin available. The older and younger members of the family would sleep in the wagon and the others in the Bender Tent.

These tents can be heated during the winter using a wood burning stove, and they are easily capable of withstanding very strong winds so long as the covers are well weighed down. Most couples had their own pony and cart. These travellers also took pride in their colour schemes, and bright yellows, reds and blues were painted on their wagons, and a belief among them was that black is unlucky for a caravan and normally meant that somebody in the family would die before the next new moon.

There was also a Romnichel winter double-bender. This large tent has a yurt-like chimney. It was secure against the elements. See Romany Life by Frank Cuttriss (1915) for details. His is probably the best book on bender tents and many other topics related to Romany Life in England. A must read.

Economic pressure and the coming of the petrol engine gradually crept in and took over from the horse drawn transport of old and today the travellers (or Pavee) now use large trailers, trucks and modern caravans together with all the modern conveniences available. A true Bow Top is now a rare sight and due to the speed that some people insist on driving it can be dangerous for a traveller when a car comes around a bend in the road only to see a caravan in front of them and no time to stop.

The travellers were nomadic and hence gathered food and hunted for small game, and became experts in the ways of animals and also herbal medicine. The settled people found their language mysterious and the fact that they used herbs and plants for medicine considered them magicians. Their dress was also considered strange, the women like bright colours and wore heavy jewellery and gold-hooped ear-rings which contrasted against their jet black hair, the men also wore ear-rings and had gaudy neckerchiefs. Above all the settled people were awed by the nomadic life of the travellers and the extravagant taboos and rituals that were observed at births, marriages and death in particular, as the travelling people would smash their tents and wagons into small pieces and set fire to them.

The traditional bow-top wagon was the most simple and common wagon type in Ireland. It provided both accommodation and a means of transport for Travellers. It is thought to have been brought here early in the 20th century by English gypsies then travelling in Ireland. By the 1930s it had become very popular and remained so until the 1960s when it began to lose out to the motor-drawn caravan. The wagons were built to be lightweight as they were pulled by one horse. They allowed people to travel in family groups and to stay on the road all year. The interior was compact and thoughtfully designed. Irish caravans were usually colourfully painted rather than decorated with intricate carving which was more typical of English examples.

A reconstructed bow-top wagon can be viewed at the Ulster Folk and Transport Museum.

Evolution of the Vardo. (originating from the Iranian word vurdon for cart). Vardo is a Romani word. Vardos can be categorized into six main styles and their history is as complex as their decoration so here is a very simple description of the six types and their features.

Reading: The “Rolls-Royce ” of Gypsy wagons, they were built in the town of Reading, England. With a narrow interior floor and outward sloping walls, the Reading was typically highly carved and painted. The rear wheels were larger for extra stability, and the wagon featured windows as well as built-in front and back porches, plus a hayrack at the rear.

Ledge: Similar in design to the Reading, the Ledge had the same raised centre roof with windows, called a “mollicraft.” An even narrower interior floor resulted in a “ledge” jutting over the wheels on either side, allowing for more room inside above knee-level.

Bow Top: Resembling a gaily-painted covered wagon from the American West, the Bowtop had a rounded wooden frame tightly fitted with a felted wool pad and canvas cover, along with a front door and back window. Wheels extended beyond the wagon’s frame, with a larger wheel at the rear.

Open lot: A more basic version of a Bow Top, the Open lot’s front doorframe is covered only by canvas, without the wooden door of the other wagon types.

Brush: The only wagon to have a door at the rear, this type was an emporium-on-wheels, with racks and display cases built onto the exterior to hold the brushes, mats, and other items that were for sale. Having the door at the rear allowed the proprietor to sell items out the back without unhitching the horse.

Burton: Similar to a circus wagon, the Burton was favoured by wealthy showmen travelling between fairs. Wheels were placed underneath a wider wagon floor, making more room for the luxurious fittings inside.

There has been a further step in the evolution of the Bow Top. You can, if you so desire, purchase a handmade traditional towable bow top wagon. These wagons are built onto a standard caravan chassis, this allows for towing by a motorised vehicle. I think they are brilliant. They can be viewed at: www.gregsgypsybowtops.co.uk

Upper image: Wagon and Bender Tent next to it.

Posted by SilentOwl at 1:17 PM