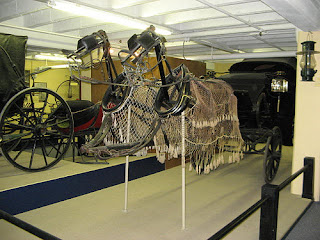 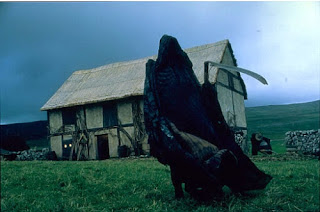 
In Irish Folklore the Death Coach is known as Cóiste Bodhar (Koe-shta-bower), meaning death or silent coach and if you see or even hear it then either you or a close relative will die in the very near future. The belief is that once the coach has come to the land of the living it cannot return empty. Once death has come to collect there is nothing on earth you can do to prevent it. The headless horseman that drives the coach is known as the Dullahan. The Dullahan is also known in Irish as Gan Ceann, meaning without head and it is usually seen either driving the coach that is pulled by six black horses or riding alongside on a black stallion. The eyes of the Dullahan are massive and are always darting around and the mouth is constantly grinning and showing a nasty row of sharp teeth. The flesh of the head has been described as smelling, looking, and having the feel of rotten cheese.

The Dullahan carries a whip and this is said to be the spinal column of a human corpse, the coach is also decorated with the remains of corpses, skulls take the place of candle holders, the cover of the coach is usually made from the shroud off a coffin. When the coach reaches the abode of the person picked by death the Dullahan calls out their name and they immediately die. There is no point trying to block the road against the horseman for as he approaches all locks and gates open and if you look upon him he will throw blood at you and this is said to mark you for death. They have even been said to snatch your eyes out with the whip. One way of protecting yourself is through the use of gold. Carry a gold pin or coin for they are said to be frightened of the yellow metal.

The Banshee, also known as Bean Sidhe in Irish sometimes accompanies the death coach flying alongside wailing and screeching out a warning to certain families that one of their members is about to die.

This story is based in folklore throughout Europe but especially in Ireland and it is a legend that is both widely known and feared. In every country where it is recorded in folklore it is treated with fear and respect for it always represents death. It seems that the one thing that unites all people is the fear of the unknown, especially when it comes to death. Why do we still believe in these old tales of superstition and signs of ill omen? Maybe it’s because it is still the one thing we have no control over, yes we may put it off for a time, but in the end it is inevitable. It is the one journey that we will all take for as the old saying goes “There are only two things we can say are certain in this life, death and taxes”.

The Cóiste Bodhar is mentioned by W. B. Yeats in his collection Folk tales of Ireland

The sound of the church bell can be heard in the distance. It is midnight on a cold winters evening. The streets of Westport are silent and most people are tucked up safely in their beds after a hard day’s work. The night is dark, clouds blocking out the moonlight, the wind sounds mournful as it rattles the window pane.

In one of the houses a man sits by the window waiting patiently for a sign that the doctor approaches. In the bed his dear wife lies silent. By the flickering light of the fire he can see her face, older now but still as beautiful as she was the first day he saw her at the village dance all those years ago. She looks drawn and every so often her face wrinkles as if in pain, the drugs don’t seem to work as they used to and it upsets him to see her so. He walks over to the bedside and strokes her brow, she holds his hand tightly and he can feel the coldness of her skin. She is barely breathing now, shallow and quickly and he knows in his heart and soul that she is slowly drifting away. In one way he is happy for her as it means she will be free from pain but for this he feels guilty, he cannot bear to see her in so much pain, sometimes she looks as if she wants to scream out in desperation “Don’t leave me” and yet he knows he must for he cannot go with her on this journey. Not tonight, not yet.

He hears the sound of horse’s hoofs and the clatter of wheels rolling over the cobbles. He gently frees his hand and walks over to the window expecting to see the doctor arriving. It’s not the doctor’s carriage he sees outside, it’s a black coach that has no horses for the shafts are empty, and yet he can still hear the sounds of hoofs and heavy breathing. The doors of the coach are closed; there are black holes where there should be windows. Slowly the coach approaches.

He breathes out a heavy sigh and is filled with deep sorrow for he knows it is the Death Coach. His wife knew that it would come for her tonight but he had told her not to be silly, she would soon be up and about, wasn’t the doctor coming and he’d give her some medicine. He didn’t believe in such nonsense, he didn’t want to believe. However, his eyes told him what his heart knew to be true for now it stopped outside and the door slowly opened. His heart was thumping in his chest as he looked upon the terrible sight and he walked over to the bed, he clutches his wife’s hand once again, she opens her eyes and smiles, that gentle smile he knows so well, she tries to squeeze his hand in return but is now too weak.

“Is it here?” she asks, her voice a bare whisper, he nods.

“I love you so much,” he says to his wife as he leans down and kisses her, as he does so he can feel her last breath on his lips, it is as if her very soul has passed through him. Her grip loosens and her hand gently falls away, she has gone from this world and he knows she has died. He stands up straight and looks upon her face with great tenderness and love, the tears flow silently down his cheeks.

As he stands there knowing not what to do he sees a movement out of the corner of his eye. He looks over and sees his wife standing by the door. he looks back to the bed and sees the body of his wife lay there looking for the entire world as though she is asleep. He looks back at what he now believes to be his wife’s spirit; she smiles at him, turns and walks through the door. He hurries over to the window and looks out, hoping to see her just once more. He sees her walk over to the open door of the coach, pausing just for a second she looks towards the window; it’s as if she knows he is stood there. She raises her hand and gives one last gentle wave; he waves back, his heart breaking, tears streaming down his face. She turns back and steps into the coach and the door closes behind her. The horseman raises his whip and the coach slowly moves away and then is gone.

“Goodbye my love,” he gently calls. In a way he knows her pain is over but for him it has just begun and with a heavy heart he turns away. Hearing a knock at the door he opens it and standing there is the doctor. “Hello, doctor, she’s dead” he says, and the tears flowed once again.


Hope you enjoyed the story.
Posted by SilentOwl at 5:58 AM