Winter solstice and plants of this time of year. 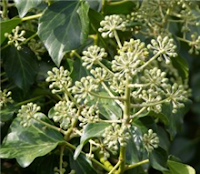 Many cultures the world over perform solstice ceremonies. At their root, an ancient fear that the failing light would never return unless humans intervened with magical ceremonies.

Yule is the day of the winter solstice, the one of the longest night. This solar festival falls close to Christmas. As the Christians converted the Pagans, they adopted many of the country dwellers’ traditions to facilitate the acceptance of Christianity. The Celtic and Germanic/Nordic traditions are the biggest influence of Pagan plants on Christmas traditions. Some of the plants associated with this time of year are:

Holly berries, cloaked in sharp green leaves, are brightest in winter. The Druids revered this plant as sacred. It has been associated with winter magic and believed to repel evil. The Celts of the British Isles and Gaul believed the Holly King ruled over winter and death.

In Scandinavian mythology, the holly belonged to Thor & Freya. The plant’s association with Thor's lightning meant that it could protect people from being struck by his bolts.

Norsemen and Celts would plant a holly tree near their homes to ward off lightning strikes. The crooked lines of the holly leaves most likely gave rise to its association with lightning, as well as the fact that holly conducts lightning into the ground better than most trees.

Ivy is an evergreen vine symbolizing immortality. It had been a symbol of eternal life in many pagan religions, including Druidism. The Christians who converted these Pagans embraced it as a symbol for the new promise of eternal life.

Mistletoe is another plant that is sacred to the Celts and the Germanic/Norse. They believed the plant enhanced fertility because it stayed green in the winters.

The Druids believed the mistletoe's magical properties extended beyond fertility. It was believed to cure almost any disease and was known as the all healer.

Sprigs fixed above doorways of homes were said to keep away lightning and other types of evil. Because the plant has no roots it was believed that it grew from heaven.

Druid priests, five days after the New Moon of Yule, would cut mistletoe from the sacred oak with a sickle made of gold. The branches were divided into sprigs and given to people to hang over their doorways for protection. Mistletoe was placed in baby cradles to protect them from faeries.

From the earliest times mistletoe has been one of the most magical, mysterious, and sacred plants of European folklore. It was considered to bestow life and fertility; a protection against poison; and an aphrodisiac. The mistletoe of the sacred oak was especially sacred to the ancient Celtic Druids. On the sixth night of the moon white-robed Druid priests would cut the oak mistletoe with a golden sickle. Two white bulls would be sacrificed amid prayers that the recipients of the mistletoe would prosper. Later, the ritual of cutting the mistletoe from the oak came to symbolize the emasculation of the old King by his successor.

Mistletoe was long regarded as both a sexual symbol and the "soul" of the oak. It was gathered at both mid-summer and winter solstices, and the custom of using mistletoe to decorate houses at Christmas is a survival of the Druid and other pre-Christian traditions.

The Greeks also thought that it had mystical powers and down through the centuries it became associated with many folklore customs. In the Middle Ages and later, branches of mistletoe were hung from ceilings to ward off evil spirits. In Europe they were placed over house and stable doors to prevent the entrance of witches. It was also believed that the oak mistletoe could extinguish fire. This was associated with an earlier belief that the mistletoe itself could come to the tree during a flash of lightning. The traditions which began with the European mistletoe were transferred to the similar American plant with the process of immigration and settlement.

Kissing under the mistletoe:

Kissing under the mistletoe is first found associated with the Greek/Roman festival of Saturnalia and later with primitive marriage rites. They probably originated from two beliefs. One belief was that it has power to bestow fertility. It was also believed that the mistletoe also possessed "life-giving" power.

In Scandinavia, mistletoe was considered a plant of peace, under which enemies could declare a truce or warring spouses kiss and make-up. Later, the eighteenth-century English credited it with a certain magical appeal and called a bunch of mistletoe 'a kissing ball'. At Christmas time a young lady standing under a ball of mistletoe, brightly trimmed with evergreens, ribbons, and ornaments, cannot refuse to be kissed. Such a kiss could mean deep romance or lasting friendship and goodwill. If the girl remained unkissed, she cannot expect not to marry the following year. In some parts of England the Christmas mistletoe is burned on the twelfth night lest all the boys and girls who have kissed under it never marry.

Whether we believe it or not, it always makes for fun and frolic at Christmas celebrations. Even if the pagan significance has been long forgotten, the custom of exchanging a kiss under the mistletoe can still be found in many European countries. Now if a couple in love exchanges a kiss under the mistletoe, it is interpreted as a promise to marry, as well as a prediction of happiness and long life. In France, the custom linked to mistletoe was reserved for New Year's Day: "Au gui l'An neuf" (Mistletoe for the New Year). Today, kisses can be exchanged under the mistletoe any time during the holiday season.

For its supposedly mystical power mistletoe has long been at the centre of the folklore tales of many countries. One such tale is associated with the Goddess Frigga. The story goes that Mistletoe was the sacred plant of Frigga, goddess of love and the mother of Balder, the god of the summer sun. Balder had a dream of death which greatly alarmed his mother, for should he die, all life on earth would end.

In an attempt to keep this from happening, Frigga went at once to air, fire, water, earth, and every animal and plant seeking a promise that no harm would come to her son. Balder now could not be hurt by anything on earth or under the earth. However, Balder had one enemy, Loki, god of evil and he knew of one plant that Frigga had overlooked in her quest to keep her son safe. It grew neither on the earth nor under the earth, but on apple and oak trees. It was lowly mistletoe.

Loki made an arrow tip of the mistletoe, gave to the blind god of winter, Hoder, who shot it , striking Balder dead. The sky paled and all things in earth and heaven wept for the sun god. For three days each element tried to bring Balder back to life. He was finally restored by Frigga, the goddess and his mother.

It is said the tears she shed for her son turned into the pearly white berries on the mistletoe plant and in her joy Frigga kissed everyone who passed beneath the tree on which it grew. The story ends with a decree that whoever should stand under the humble mistletoe, no harm would befall them, but they should receive a kiss, a token of love. What could be more natural than to translate the spirit of this old myth into a way of thinking and accept the mistletoe as the emblem of that Love which conquers Death?

Happy Solstice. Happy Yule. Happy Xmas. To all.
Posted by SilentOwl at 10:56 AM

Email ThisBlogThis!Share to TwitterShare to FacebookShare to Pinterest
Labels: Folklore and Paganism.