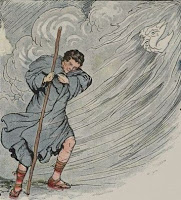 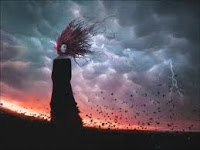 This is a sudden gust of wind or a whirlwind that was thought to have been caused by the faeries. The wind was preceded by a loud humming noise, like thousands of bees, this was believed to have been caused by the passing of a fairy host, or there may have been a fairy host within the wind. Several Irish phrases describe it: sídh/sí gaoithe, sídh/sí chóra, gaoth sídhe/sí, séideán sídhe/sí.

Sometimes it was thought that the wind was evidence that the fairies were helping with the farm labour. At other times the wind was thought to be the source of sudden illness. The wind could even rip the roof of a poor family’s house and let the faerie host in. It was also said to protect fairy treasure from thieves, it would silence mortal musicians playing fairy music and cause injury to humans or animals, especially the eyes.

The folk beliefs associated with whirlwinds and comparable gusts of wind.

Weather and atmospheric occurrences were of particular interest to the people who lived in the countryside, and they were not slow to give their own explanations for any unusual climatic manifestations especially in relation to whirlwinds which, in broad daylight, would suddenly raise coils of dust or carry away hayricks, straw or flax, through the air, sometimes as far as the neighbours’ fields.

These unusual whirlwinds played their part in weather forecasting. For some, if the whirlwind turned towards the southwest, they would say 'it was fetching rain’. According to others still, the sudden gust of wind that carried away wisps of hay or straw meant that the coming winter would be a hard one.

In Ireland, when a great wind was seen whirling everything into the air, it was often interpreted in terms of the fairies – that the fairy host was passing by, sometimes carrying mortals away with it. Indeed, almost any death, other than a gentle and gradual departure in old age, was open to interpretation as the work of the fairies. In the case of a young person’s death, people would talk about abduction by the fairies.

According to oral tradition ‘on Midsummer Eve, when the bonfires are lit on every hill in honour of St. John, the fairies are at their gayest, and sometimes steal away beautiful mortals to be their brides. They were also believed to be continually trying to abduct newborn children (usually males) to replenish their own fairy population, and to take young mothers into fairyland in order to suckle such abducted children.

As the fairies were thought to be very keen on music, it was said that they would also try to abduct mortals whose musical skills far exceeded theirs. Consequently, it was considered dangerous to find oneself in the path of a whirlwind. W.B. Yeats said that that fear was expressed in the attitude of the peasantry when they saw such whirlwinds: ‘They would take off their hats and say “God bless them!”

According to another Irish belief, there were known paths in the countryside through which the trooping fairies, an slua sí, were said to travel. It was thought wrong to obstruct these paths in any way. The story was told of a man who insisted on building his new house in a place considered a fairy path by the old people.

Although they warned him against doing it, he proceeded to build it, and then a mighty blast of a sidhe gaoithe knocked him down one night as he was holding a lighted torch. Assisted by the wind the thatch was ablaze within minutes and the dwelling was destroyed.

The fairies apparently also considered that the land, on which they dwelt, as well as what was growing on it, belonged to them. This was particularly the case around ring forts. They would thus raise a wind in order to claim their crop, according to the following story collected in County Limerick in 1940:

There was a man in this townland by the name of Jim Egan, and he died about thirty years ago. Well, one time in harvest he had a lot of mowing to do, and this night there was a full moon so he said he would break into another field of hay before he went to bed. So he started off mowing away in a meadow that had a fort in it, and after a while he noticed that six other mowers were after falling in behind him. He never saw them coming, but only heard the cutting behind him, and when he looked to see what it was, he saw the six men behind him and they all keeping time with his stroke.

So he cut away and they were making short work of the meadow until they came to a stream that was running through the middle of it. One of the men said to him that they could not cross the running water, but that he should jump across it himself and leave his scythe behind him. So he did that and he went home to bed.

When he got up in the morning, the meadow was all cut, and he and his family saved it. They had all the hay stacked in the field and he thought that everything was all right, but the next day a fairy wind rose up suddenly and swept most of the hay away. The fairies played their part in cutting the hay, so they decided to take it away with them too.

Some people who owned fields on ‘fairy land’ were thought to be luckier than others, and the fairy wind might even bring them prosperity. However, this was probably more a matter of chance than of real intention on the part of the fairies, as shown by the following anecdote. It comes from Monkstown, County Cork and was told by his grandfather to Sean Doyle, aged thirteen years at the time, and was recorded by him in the Irish Folklore Commission’s Schools’ Manuscript Collection, dating from 1937-8

The story was presented as referring to an actual happening:

This story happened about a century ago on a farm in Ballyfouloo.

An old woman who lived there at that time went picking sticks or furze as was her custom to boil the skillet. When she came to the corner of the field where a big hawthorn bush was growing, or as they called it at that time a ‘scarteen’ (Irish: scairtín, “a thorny bush’), her eyes stood in her head with fright, for almost on every thorn there was paper, as she thought, stuck.

On drawing closer she discovered that it was paper money; she was afraid to touch it because she said it surely belonged to the fairies. She ran home in haste. She told the neighbours about it, and, of course, the news spread like wild fire.

It eventually came to the ears of the farmer who owned the land. He, of course, went to the spot and claimed it as his, because it was found on his land. How the money got there is a mystery, but the old people say that the money was blown onto the bush by a ‘sheegee’ Irish: sí gaoithe, ‘whirlwind’.

However, these tales of the wind bringing good fortune were not so common. In general, the whirlwinds were dreaded, all the more because, as well as carrying souls, crops and even human beings away, they could also cause physical hurt to people. If a whirlwind arose suddenly, it was highly recommended to lie on the ground for its duration, as anyone who dared to remain in its path might suffer harm or facial deformity: (they said that if you were caught like that your mouth would become crooked and remain so).

In Ireland, it was again the fairies who were blamed for such afflictions. It was said that one should never look in the direction of a whirlwind, and people would speak about the ‘poc sí’, ‘fairy-stroke’ as resulting from their wind induced attacks. The ‘poc sí’ could take many forms. Any sudden fall or injury or any unexplained laming, deafness, loss of speech, fainting spell, distortion or swelling could be attributed to it, particularly if an unusual puff of wind had been observed about the time of the onset.

In Cork, young children were told that if they stood in the middle of it, they would not grow any more. However, tradition also provided people with the means of counteracting the supernatural powers of the beings thought to create whirlwinds – anybody had the power to exorcise such whirlwinds, as it is a well-known belief that supernatural beings hate iron, so one had only to throw an open knife – preferably a black-hafted one – or any other steel implement at them, to counteract their force.

In Ireland. If someone flung a fork at the whirlwind, moaning might be heard. This was considered proof enough that there was a being in it, and that is why, in order to avoid evil consequences, the person who threw the sharp tool was supposed to say at the same time: M’olc agus m’urchóid leat! (‘May my misfortune go with you’?)
Posted by SilentOwl at 6:56 AM