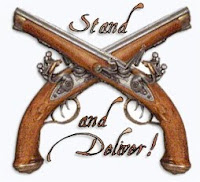 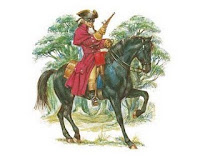 Captain Gallagher was one of the last wholesale robber captains in Ireland. Born in Bonniconlon he was reared by an aunt in Derryronane near Swinford. Captain Gallagher was a romantic figure in the same league as Robin Hood or Dick Turpin. He was a folk hero who was champion of the oppressed lower classes who suffered much injustice at the hands of the rich.

He and a small band of bandits operated with blunderbusses within an extensive area stretching from Bonniconlon to Swinford and including Attymass, Lough Talt and Foxford. Their deeds were bold and utterly fearless. Robberies were committed on the public roads and in open daylight; residences of the gentry were plundered almost nightly, and no place was considered safe unless strongly guarded.

He was such a notorious figure that his deeds are recalled in folk history throughout the region up to the present day. All of the accounts in folklore make reference to his generosity to the poor and his athletic ability in escaping from the Redcoats. Up to the present day people point out some of his famous hideouts, one in the Ox Mountains near Rooskey is referred to as “Leaba Rudaigh”.

Nearer to Swinford people will tell you he hid out in Ballylyra Wood close to the present day Knock International Airport. He is reputed to have had a residence on Glass Island, close to Pontoon (circa 1817-1818). Prior to his death there was a 500 guineas reward offered for his capture.

There is a story told of a shop in Foxford that was being robbed regularly and its owner could never find the culprit at work. Although he hired a guard to protect the property it was still being robbed almost nightly. Captain Gallagher offering his services to apprehend the thief, hid in a large chest in the corner of the shop. The guard arrived and it was not long before he began to pillage the store. When Gallagher got the chance he leapt out of the box and captured the guard who had been the thief all along.

On another occasion a woman was coming from the fair in Tubbercurry having sold her last cow in order to pay her rent to the local landlord. Nightfall was approaching as she passed through the Windy Gap near Lough Talt when she spotted a shadow in the distance. As they met, the person spoke and asked her where she was going in such a hurry. She replied that she was trying to reach home before dark in case Captain Gallagher robbed her. On hearing this the man smiled and gave her the price of the cow and the money with which to pay the rent. He told her to go away home and tell them that Captain Gallagher was not as bad a rogue as he was made out to be.

On another occasion Gallagher escaped through the window of a house as a party of military accompanied by a magistrate entered the front door. The daring captain, on reaching the ground, crept around to where the magistrate’s horse was fastened, and, loosening him, rode off at full speed, and the next day returned the animal, with his thanks, to the magistrate for the use of so good a beast at such a pinch.

Following narrow escapes Captain Gallagher was finally captured. His band had already been arrested near Westport but Gallagher managed to escape. There are many tales as to where he was actually captured, but much of the evidence seems to point to the small mountainside townland of Rooskey on the border of Attymass and Foxford.

According to local legend he was staying in a local house while recovering from an illness. He was given a meal, which had been laced with poteen, after which he fell asleep. The family then got to work and put him to bed in the “cailleach” bed beside the fire .His ankles and wrists were tied with flax ropes and a message was sent to the Redcoats in Foxford, who in turn alerted Ballina, Swinford and Castlebar. Captain Gallagher already bound was taken to Castlebar to be hanged after ‘a hasty, sham trial’.

Gallagher pleaded with his executioners and promised if spared he would lead them to his hidden treasure that was buried under a rock in Ballylyra Wood. His captors did not fall for this ploy however and went ahead with the execution. As soon as the nasty business of the day was finished they fled to Ballylyra in search of the hidden treasure but found that there were as many rocks in the wood as there are fish in the sea. After searching for three days all they found was a jewel-hilted sword. His buried gold is still supposed to be buried in the wood, seven foot from the river beside a tree.

His execution was reputedly the last public hanging to take place on the hanging tree opposite Daly’s Hotel on the Mall in Castlebar in 1818.

The following is an account of his execution taken from a late nineteenth century author:

He died fearfully. He and his ‘Secretary’ (Walsh) having shaken hands and kissed on the gallows, were flung off together. Walsh died at once, but Gallagher’s rope broke, and he was precipitated to the ground; he got a glass of wine, and was again shoved out on the trapboard by the executioner, seated like a tailor, his legs having been broken by the fall.

• Whiskey in the Jar
• The Newry Highwayman
• The Wild Rover

Whiskey in the Jar.

“Whiskey in the Jar” is easily one of the most famous folk songs of Ireland. It tells the tale of an unnamed highwayman who robs a military or government official (usually Captain Farrell, but other names are common). He brings the loot home to his sweetheart (usually Jenny, but sometimes Ginny or Molly) who betrays him to the law.

Although the exact date of its creation is unknown (its earliest printing was 1855), “Whiskey in the Jar” is easily over 300 years old. Alan Lomax, one of the most influential musicologists of the 20th Century, believed that “Whiskey in the Jar” partially inspired John Gay when he wrote “The Beggar’s Opera,’ written in 1728.

The use of the term “rapier,” a long, thin, sword used in the 16th and 17th Centuries dates the song to that era. “Rapier” could also refer to a “rapaire,” an Irish short spear used in that era by highwaymen and Jacobite sympathizers.

“Whiskey in the Jar” was also a popular tune in Colonial America due to its protagonist being an adversary of British officials. Similar to England and Ireland, Colonial Americans took pleasure in the exploits of some highwaymen, especially the ones who struck a Robin Hood-like pose by targeting wealthy land owners--something more common in song that in reality.

“Whiskey in the Jar” has been covered by such diverse musicians as:
• Jerry Garcia and David Grisman
• Thin Lizzy
• The Pogues
• Burl Ives
• Metallica
• The Limeliters

The Newry Highwayman (The Rambling Boy)

“The Newry Highwayman” is a far-travelled song that has taken on many different names over the years. The earliest printed version comes from 1830, but some versions of the song mention “Fielding’s Gang,” a reference to the Bow Street Runners-- London’s first police force, created in 1750.

“The Newry Highwayman” is about a young man from Newry, in Northern Ireland. At the age of 17 he gets married, and in order to keep his wife “both fine and gay” becomes a highwayman. He robbed his way successfully to London, where he is eventually taken and executed.

As mentioned above, “The Newry Highway” is a folk song that has taken many other names. Other names that it goes by are:
• The Rambling Boy
• Wild and Wicked Youth
• In Newry Town
• Newlyn Town
• The Flash Lad
• Adieu, Adieu

Although “The Wild Rover” is generally believed to be of Irish (or possibly Scottish) origin, this has recently come into dispute. There is German folk song with an identical tune as “The Wild Rover.” The question remains as to which came first.

Regardless of its origin, “The Wild Rover” has become an immensely popular drinking song around the world and especially in Ireland, ironic since that it was originally written as a temperance song.

Perhaps due to its popularity as a drinking song, “The Wild Rover” has been used, modified, and parodied countless times by football and rugby clubs. Many of the lyrics are not suitable for publication here.

Some other Irish folk songs involving rogues and highwaymen include:

Like many cultures, the Irish have their own songs about the rogue, the tramp, those from the other side of town. And like many, the Irish are not afraid to tip a few back to salute them.
Posted by SilentOwl at 2:30 PM

Email ThisBlogThis!Share to TwitterShare to FacebookShare to Pinterest
Labels: Folklore in Traditional Music.