An Irish Xmas or Yule. 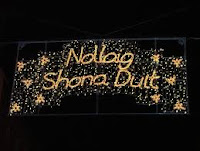 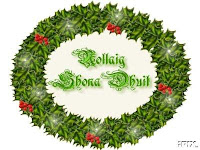 In the Irish language Christmas is called "Nollaig" which comes from the Latin "natalica" meaning birthday.

Irish Christmas history shows us some traditional rituals of Christmas in Ireland. Ritual here is used in a very broad sense, some have little religious significance, but great social importance. A lit candle in the window on Christmas Eve is one such custom. All Irish homes have a lit candle, which has the symbolism of showing the light to the stranger after dark. This is a most ancient custom when people were really hospitable. The candle has to be lit by the youngest in the family and extinguished by any girl named "Mary" although these days the youngest child can extinguish it. Candle lighting at this time can also be traced back to antiquity, to the time when ancient Romans lit candles at the midwinter festival to signify the return of the sun's light after the winter solstice.

The custom of a laden table is also an endearing one. The table is laid with bread filled with caraway seed and raisins and a large pitcher of milk and a candle. This means that any weary traveller or Joseph and Mary can avail of this hospitality if they so wanted and is an integral part of Irish Christmas History. Nowadays we place a glass of milk and a mince pie for Santa (no alcohol because he has to drive the sleigh) and a carrot for Rudolph. In the rural areas we have a tradition of white washing the stone cow house and other outhouses and having a big clean up around the place to get ready for visitors.

No Irish home would be complete without the holly. Holly with its glossy green leaves and festive red berries are perfect for holiday decorating. At Christmas in Ireland, holly was used to decorate the entire house. A spray was placed over the door as well as on the mantle, around picture frames, among the plates on the cupboard, as candle rings and in other areas of the home. Gifts of holly boughs were also given to neighbours. One charming folklore superstition was that the fairy folk would come in out of the cold to find shelter in the holly branches. To the Celtics holly represented both life and rebirth, the evergreen leaves symbolized life during a time when all else was bare and the red berries represented the coming of Spring.

Decorating trees was a tradition which actually began in Ireland and has carried over to many other cultures. In fact, decorating Christmas trees began as a pagan tradition. Various pagan cultures did this to signify the importance of the moon and the sun, and all aspects of the universe that they could see. The seasons were very important to pagan cultures, and Ireland was largely a pagan-dominated culture before Christianity came to it.

Of course now, decorating Christmas trees is a widespread custom. People all over the world do this at Christmas, but few realise the origins came from pagan traditions in Irish and Celtic cultures. The present day Christmas tree also goes back to the worship of sacred trees by various religions. The Druids worshipped the Rowan or the Oak tree, the Egyptians worshipped the palm tree and in Rome it was the fir tree. Gift giving took place, coloured lights were used to ward off evil spirits, and festive foods were eaten.

We decorate the house with ‘Christmas decorations’ about two weeks before the 25th and these days people even decorate trees in their gardens with lights. These decorations must be taken down no later than the 6th January or bad luck will ensue. This day is also known as ‘little Christmas’, on this day the mother of the house puts her feet up and is not allowed to do any work, it’s her day to be waited on by all the other members of the family.

We also tend to all the livestock making sure they have clean warm bedding, fresh water and food. Wildlife in the garden and around the area also require food and water and so we also tend to them. Whether you call it Yule or Christmas this time of year has a wonderful feel to it, it’s great walking around the town saying hello to everyone and having the craic, picking up the turkey or goose and all your supplies and then having a pint before making your way home. Don’t forget your neighbours, they may be lonely, cold or hungry and if you can spare a little something for those without then fair play to ye.

Christmas dinner with the family is a great time. We will have the children and grandchildren around, we will visit extended family on St. Stevens day and look forward to seeing friends over the festivities.

The light of the Christmas star to you
The warmth of home and hearth to you
The cheer and good will of friends to you
The hope of a childlike heart to you
The joy of a thousand angels to you
The love of the Son and God's peace to you.
Posted by SilentOwl at 10:18 AM

Email ThisBlogThis!Share to TwitterShare to FacebookShare to Pinterest
Labels: folklore and Christmas.