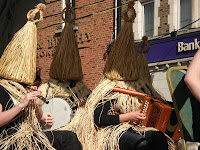 Irish tradition holds that the wren symbolizes the old year, while the robin symbolizes the year to come. To ensure that the passage from old year to new could take place, it was once common practice on St. Stephen's Day (December 26th) for a group of local boys to hunt and kill a wren.

This band of so-called Wren Boys, usually costumed and often masked, would then travel from house to house carrying the wren in a small box or casket (other sources say the wren was tied to a pole and decked with ribbons). They regaled each house with musical laments for the unfortunate bird along with pleas to raise money for the funeral.

This ancient tradition can still be seen in certain town and villages in Ireland and it really is a sight to behold! The Wren Boys march through the streets dressed in traditional attire (usually something made from straw) to the beat of drums and they stop off in bars along the way to play traditional music. Money is still collected but this is given to charity and of course a wren is not killed anymore but some Wren Boys march with a fake bird.

Although the Wren Boys are rarely seen today, they provide a historical thread to Ireland's past. Some sources say the wren is villified because it had betrayed Irish soldiers who were staging an attack on the invading Norsemen (who had been responsible for the destructions of some of the great monastic communities of early Christendom, such as the Abbey at Kells). Pecking at some bread crumbs left upon a drum, the wren betrayed the hiding place of the Irish and led to their defeat.

The same story is told about troops of Cromwell. When the Irish forces were about to catch Cromwell’s troops by surprise, a wren perched on one of the soldiers drums made a noise that woke the sleeping sentries just in time, thereby saving the camp.

Other myths hold that the wren betrayed St. Stephen himself with its chirping, leading to the first martyrdom of a Christian saint. Although the custom of sacrificing a wren is most commonly associated with Ireland, some form of the tradition actually exists throughout the Celtic world, with similar rites found in the Isle of Man, Wales, and France.

Other stories say the hostility towards this most harmless of creatures results from the efforts of clerics in the middle ages to undermine vestiges of druidic reverence and practices regarding the bird. Medieval texts interpret the etymology of wren, the Irish for which is dreolín, as derived from 'dreán' or 'draoi éan' the translation of which is 'druid bird'.

One of the most interesting legends is that Cliona, a woman of the otherworld, seduced young men to follow her to the seashore. Here they drowned in the ocean into which she enticed them. Eventually a charm was discovered that, not only protected against her wiles, but could also bring about her destruction. Her only method of escape was to turn herself into a wren. As a punishment for her crimes she was forced to take the shape of the little bird on every succeeding Christmas Day and fated to die by human hand. Hence the seemingly barbarous practice of hunting the wren.

Song that is sung during the wren boys march.

‘The wran, the wran, the king of all birds,
On St. Stephen's day was caught in the furze.
His body is little but his family is great
So rise up landlady and give us a trate.

A glass of whiskey and a bottle of beer
Merry Christmas and a glad New Year.
So up with the kettle and down with the pan
And give us a penny to bury the wran.

Sometimes the lines, ‘We chased him from bush to bush and from tree to tree, and in Donnelly’s Hollow we cracked his knee’, were included.

WHY THE WREN FLIES CLOSE TO THE EARTH.

ONE day when the birds were all together, one of them said, "I have been watching men, and I saw that they had a king. Let us too have a king."

"Why?" asked the others.

"Which bird shall it be? How shall we choose a king?"

"Let us choose the bird that flies farthest," said one.

"No, the bird that flies most swiftly."

"The most beautiful bird."

"The bird that sings best."

The owl sat a little way off on a great oak-tree. He said nothing, but he looked so wise that all the birds cried, "Let us ask the owl to choose for us."

The wren is very small, but she cried even more eagerly than the others, "Let us choose the bird that flies highest," for she said to herself, "They think the owl is wise, but I am wiser than he, and I know which bird can fly highest."

Then the birds tried their wings. They flew high, high up above the earth, but one by one they had to come back to their homes. It was soon seen which could fly highest, for when all the others had come back, there was the eagle rising higher and higher.

"The eagle is our king," cried the birds on the earth, and the eagle gave a loud cry of happiness. But look! A little bird had been hidden in the feathers on the eagle's back, and when the eagle had gone as high as he could, the wren flew up from his back still higher.

"Now which bird is king?" cried the wren. "The one that flew highest should be king, and I flew highest."

The eagle was angry, but not a word did he say, and the two birds came down to the earth together.

"I am the king," said the wren, "for I flew higher than the eagle."

The other birds did not know which of the two to choose. At last they went to the oak-tree and asked the owl. He looked to the east, the west, the south, and the north, and then he said, "The wren did not fly at all, for she was carried on the eagle's back. The eagle is king, for he not only flew highest, but carried the wren on his back."

"Good, good!" cried the other birds. "The owl is the wisest bird that flies. We will do as he says, and the eagle shall be our king."

The wren crept away. She thought she was wise before, but now she is really wise, for she always flies close to the earth, and never tries to do what she cannot.
.
Thats what you get for cheating
Posted by SilentOwl at 11:02 AM