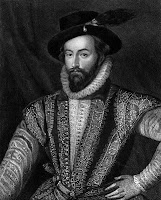 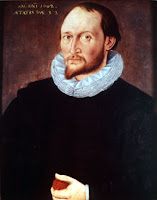 THOMAS HARRIOT – THE TRUE DISCOVERER OF THE POTATO

Spare a thought for poor old Thomas Harriot, the sometime Waterford resident who actually brought the first potato back to Europe only to have his thunder stolen by Sir Walter Raleigh.

Born in 1560 in England, Thomas Harriot was considered by his peers to be the most brilliant mathematician of the Elizabethan Age, and in 1577, he went to Oxford University where he met and befriended Raleigh, eight years his senior and already rising steadily through the English hierarchy. The two men hit it off from the outset and Harriot subsequently became Raleigh's most trusted friend and also his accountant.

Over the next six years, Raleigh established his reputation as one of England’s great heroes, principally by stealing large cargos of gold and silver from luckless Spanish ships that came his way. Raleigh’s power base was in Ireland where he first made his name crushing Irish Catholic rebels during the Desmond Wars. By 1586, the Royal favourite had secured ownership of a whopping 42,000 acres of Munster, forfeited by the rebel Earl of Desmond. Much of this vast estate ran along the fertile River Blackwater, culminating in the walled town of Youghal of which Raleigh became Mayor in 1588. His home in Youghal was Myrtle Grove and still stands today.

It is here that he is said to have planted the first potatoes in Europe.

That may well be true but Raleigh would not have had any potato seeds at all were it not for his aforementioned friend, Thomas Hariot.

In 1584, a Raleigh-sponsored expedition returned from North America with two 'lusty savages' on board. These men were called Manteo and Wanchese and came from an island, apparently called 'Wingandacoa', off North Carolina. Harriot spent a phenomenal amount of time with the two Native Americans, learning their ways and mastering their language. One of the first things he learned was that 'Wingandaco’ simply meant 'You have nice clothes' - one of the foremost examples of positive race relations in early American history.

Utterly fascinated by the pair, the following year 25-year-old Harriot decided to brave the journey across the Atlantic and accompany Manteo and Wanchese back to the New World. They sailed with Sir Richard Grenville who was planning to establish England’s first colony at Roanoke in Virginia. Raleigh was longing to go too but his Queen had by now fallen in love with him and insisted he stayed close to hand.

Shortly after arriving at Roanoke, Harriot and his friend John White set off with Manteo deep into Native American territory. They wintered together by Chesapeake Bay for three months, surveying the territory by day, sleeping rough at night. Harriot described the bay as a 'paradise of the world', full of 'merchantable commodities' and edible fruits, fowls and animals, including a 'multitude of bears being an excellent good victual'.

Harriot and White befriended the natives, Iroquois and Algonquin alike. The tribesmen were much impressed with Harriot's game-on attitude and his quick mastery of their language. During his stay, Harriott came upon two particularly interesting ‘merchantable’ goods - openauk and uppowoc, otherwise known as potatoes and tobacco. He later described how the Indians dried and powdered the tobacco leaves, then smoked them in their pipes. Smoking, he suggested, was a perfect way to purge 'superfluous phlegm and other gross humours' from the body.

However, news emanating from Roanoke did not bode well for the Englishmen. Tensions between the English colonists and the indigenous natives had erupted in violence and bloodshed. Grenville was calling off the expedition and heading home. Harriot was furious. Those who spoke loudest of Indian treachery, he maintained, had never even left the fort. Harriot and White reluctantly bade their Chesapeke friends farewell and made it back in time to catch the last ship to England. Of those Englishmen who remained at Roanoke after their departure there is no further record. Nor do we know what became of Manteo or Wanchese.

As their ship bounced across the Atlantic, Harriot wrote notes, juggled potatoes and sniffed tobacco. Once back in London, he went to Raleigh with his findings. Raleigh quickly made his way to Queen Elizabeth and showed her the goods. She tried a puff of tobacco from his trademark silver pipe but the effect made her queasy. The Royal Court ooohed and aaahed at Sir Walter’s amazing finds and so, of course, it passed into legend that he personally ‘discovered’ both the potato and tobacco.

Harriot complied his memories into 'A Briefe and True Report of the New Found Land of Virginia', published in 1588 and swiftly translated into Latin, French and German. The paper was something of a propaganda piece, designed to reassure investors and possible settlers that all was not lost. It was written at Molana Abbey, a stunning abbey which still stands today, albeit crumbling fast, upon the banks of the River Blackwater, close to Raleigh’s home in Youghal. The report was illustrated by a series of evocative drawings by John White, who lived at Newtown, Kilmore, Co. Cork.

Harriott went on to become part of a curious intellectual circle, known as the School of Night, obsessed by the occult. This high-profile group, which included both Marlowe and Shakespeare, occasionally met at Molana. Its chief organizer, the Wizard Earl of Northumberland, was later imprisoned for life for supporting Guy Fawkes. Raleigh was also tried for treason and eventually executed in 1618. In his will, he left Harriot a generous pension and all his 'black suites of apparel'. Harriot himself was condemned as an atheist and homosexual. He narrowly escaped execution and died in 1621.

Harriott passed into historical obscurity. His ghost may take heart, however, from the knowledge that 400 years later, the merchantable good he happened upon in Chesapeke is the world’s number one non-grain food commodity, with annual production exceeding 325 million tons.

Even if Raleigh did get all the credit.

Email ThisBlogThis!Share to TwitterShare to FacebookShare to Pinterest
Labels: Folklore and food.