Florence Newton. The Witch of Youghal 1661. 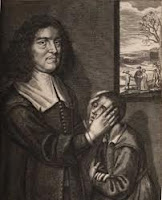 Florence Newton. The Witch of Youghal (1661)

In areas of Ireland that had been widely settled by the English, English law prevailed. So it was not unusual to find an English-type witchcraft accusation in such an area as Youghal, County Cork, which had been extensively settled by English puritans. Since the mid to late 1500s the town had been considered ‘English’. Sir Walter Raleigh had been one of its early mayors and the first potatoes from the New World were grown in Youghal, and ‘English ways’ were said to prevail there. So it is not surprising that English beliefs in witchcraft should also manifest themselves there in the trial of Florence Newton in 1661.

It all began because of a disagreement between an old woman and a young girl. Florence Newton was committed to Youghal prison by the mayor of the town on 24th March 1661 to stand trial for witchcraft at Cork assizes on 11th September. She was accused of bewitching a servant girl, Mary Longdon, who was called to give evidence against her at her trial. Newton was a beggar woman who seldom worked and who went from door to door scrounging what she could, she had a nasty reputation and used this to intimidate people to get what she wanted.

Mary Longdon was a servant to a well to do local bailiff who went on to become mayor and because of her position she believed this gave her the right to airs and graces and she was thought by those who knew her to be a little bit snobbish.
Longdon accused Newton of threatening her because she refused to give her food from her masters table, later she was confronted by Newton who she said kissed her violently. Shocked by this Longdon returned home. Shortly afterwards she fell ill and became subject to ‘fits and trances’ which became extremely violent. When having these fits she would start vomiting all manner of odd things-needles, pins, horseshoe nails, wool and straw and it would take three or four strong men to hold her down.

During these trances, she saw visions of Florence Newton who would approach her and stick pins into various parts of her body. Longdon stated that the fits and trances only began when Newton had kissed her and that by that kiss, she ‘had bewitched her’ It is here that Newton sealed her own fate for as Longdon finished giving her evidence, Newton pointed at her and said “Now she is down”. Upon which Longdon fell to the ground and had a violent fit, biting at her own arms, shrieking and foaming at the mouth, much to the distress of all in the courthouse.

Newton was ordered to recite the Lord’s prayer but after several attempts failed to do so. The trial now began to take on some of the characteristics of English witch finding with specific examinations of the accused taking place under the supervision of supposed ‘experts’. Valentine Greatrakes (or Greatrix as he is called in some records) seems to have operated in this case much in the same way as Matthew Hopkins in Essex. Why he involved himself in the case is unclear but it seems he was contacted by some of the Youghal citizens as he had professed himself to have a knowledge of witchcraft and the methods used to interrogate suspected sorcerers.

The evidence against Newton was further strengthened when her jailer dropped dead, he was ill and now it is thought he had a stroke but his dying words were “she’s done for me” The trial concluded, she having been indicted on two counts-first, the bewitching of Mary Longdon and, secondly, causing the death of her jailer, David Jones. The trial had been almost wholly conducted in an English manner and according to English law.

It caused great interest in Youghal and further afield and was considered to be so important that the Irish Attorney General went down to prosecute. Sadly there is no record of the verdict and Florence Newton disappears from all records of the time. It is likely, however, that she was found guilty and was sentenced to be hanged in accordance with the punishment prescribed by English law in such matters.
It is easy, with the benefit of hindsight to dismiss these events as fanciful but to do so would be to dismiss the thinking of seventeenth century Ireland.

The lawmakers and rulers of this society were the educated people of the time. Witchcraft was a label they attached to anything they considered to be inexplicable and it also enabled them to cope with the changing ethos of the time. The Trial of Florence Newton offers an insight into the link between Irish and English society at the time. It showed the tension, fear and anxiety that underpinned life in a seventeenth century Irish plantation town.

The image in the middle is of Valentine Greatrakes.
Posted by SilentOwl at 12:36 PM