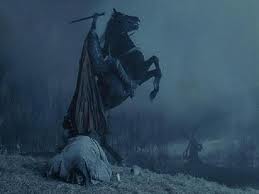 The Irish Dullahan (also Gan Ceann.) is a type of unseelie faerie (dark faerie). He is a soul collector who roams the countryside during midnight on certain Irish festive days. He is dressed in a long black cloak and is headless, usually seen riding a black horse and carrying his head under one arm. The head's eyes are massive and constantly dart about like flies, while the mouth is constantly in a hideous grin that touches both sides of the head. In some of the stories his horse has a head too. Its head is longer than its body by 6 yards and has flaming eyes and short ears.

The flesh of the head is said to have the colour and consistency of mouldy cheese. He has a large mouth filled with razor sharp teeth filed to a point. The Dullahan whip is actually a human corpse's spine, and the wagons they sometimes use are black horse drawn hearses. When the Dullahan stops riding, it is where a person is due to die. The Dullahan calls out their name, at which point they immediately perish.

W. J. Fitzpatrick, a famous storyteller claims to have seen a Dullahan. He recounts:
“I seen the Dullahan myself, stopping on the brow of the hill between Bryansford and Moneyscalp late one evening, just as the sun was setting. It was completely headless but it held up its own head in its hand and I heard it call out a name. I put my hand across my ears in case the name was my own, so I couldn't hear what it said. When I looked again, it was gone. But shortly afterwards, there was a bad car accident on that very hill and a young man was killed. It had been his name that the Dullahan was calling”.

In other legends he sides with the legendary ghost, the Banshee, and they drive a black cart (called the Coiste Bodhar, death coach) drawn by six black horses and whips them with his whip made of a human spinal cord. When he rides out on his own he uses the whip to pluck out the eyes out mortals foolish enough to spy on him during his nightly runs. It is said that the Dullahan hates those with sharp eyesight. The only fear he has is gold, which any lonely traveller at night would be wise to have to ward off him off.

It was once believed that the Dullahan was sent by the queen of the fairies to punish mortals that had betrayed the secrets of the fairie folk.  He would visit you as you slept and one touch of his hand would cause the muscles of your arm or leg to wither and die. He would then leave as silently as he came.
Some people believe that the Dullahan is the embodied spirit of a Celtic god, Crom Dubh, who demanded human sacrifices each year. The worship of Crom Dubh continued in Ireland until the sixth century, when Christian missionaries arrived from Scotland. However, Crom Dubh still wanting souls became the Dullahan or Far dorocha ( Dark Man.)

The Unseelie Court is the opposite of The Seelie Court.  Those that fly through the night are called The Host or The Horde.  It was said that any mortal unlucky enough to cross paths with The Host would be attacked and forced to participate in their nocturnal activities. The Unseelie court comprised of the most unholy, and evil of the fairies.  It has been suggested that the early Christian church invented these stories to stop pagans from participating in fertility rites at Beltaine and other important rituals at other times of the year (Samhain, etc).

“Faeries come take me out of this dull world,
For I would ride with you upon the wind,
Run on top of the dishevelled tide,
And dance upon the mountains like a flame.”
W.B. Yeats, The Land of Heart’s Desire.
Posted by SilentOwl at 2:41 PM