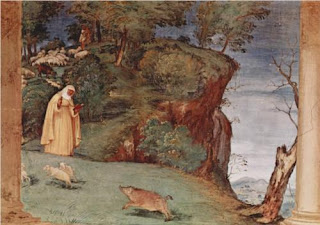 There was a time when the ground around a monastery was regarded as holy ground.  It was considered a safe place and no one was allowed to enter it with weapons or remove anyone against their will. It wasn’t just humans who knew about this, the animals seemed to know about it as well.  The following stories concern the monastery at Kildare (Cill dara), the church of the oak, and St. Brigid.

Brigid and the Boar.

One day a group of hunters were chasing a wild boar and just before they managed to trap it the boar staggered onto the grounds of the monastery.  The hunters stopped outside the gates and waited for the nuns to chase the boar back out to them so they could kill it. However, Brigid saw the state of the poor thing and decided that the boar had claimed the right to sanctuary just as if it was human and so it deserved to be given a place of safety in which to rest.  She sent a message out to the hunters telling them of her decision, they of course demanded to be given their boar as it was an animal and didn’t deserved the same rights as humans.  Brigid replied that as far as she was concerned all living creatures deserved the same rights and so that was an end to the matter.

The hunters were extremely angry but could do nothing, so disappointed they rode away. As for the boar, well it had its wounds cleansed and was given food and drink.  It soon got over its ordeal and Brigid led it to her own herd of pigs on the monastery farm.  At once the boar cheered up as it saw all the female pigs smiling and winking at him; he became very tame and settled into the herd.  He lived there very happily and as far as I know he might still be there and if he isn’t he’ll be somewhere else.

Brigid and the Fox.

Brigid had a wonderful way with animals. One day a friend of the monastery workmen came to her with a sad tale that the friend had accidentally killed the king of Leinster's pet fox, thinking that it was a wild animal. The man was arrested. His wife and children begged the king to spare his life to no avail. The workman asked Brigid to intercede.

Although Brigid loved animals, she thought it was wrong that a man's life should be demanded in return for the fox's, so she ordered her horse and cart to be made ready and she set out for the court. The way lay through a wood, where the road was a mere track and the horse had to walk. Brigid prayed for the right words to speak to the angry king to save the life of the woodsman.

Suddenly she saw a little fox peeping shyly at her around a tree and she had an idea. She told her driver to stop and called the animal to her. Immediately it sprang into the cart beside her and nestled happily in the folds of her cloak. Brigid stroked its head and spoke to it gently. The little fox licked her hand and looked at her with its big brown eyes.

When she reached the king's castle, the fox trotted after her. She found the king still in a mighty rage. "Nothing," he told her angrily, "nothing in the world could make up to me for the loss of my beloved pet. Death is too good for that idiot who killed him. He must die as a warning to others. Let him die."

The king stormed on, "It is no use asking for mercy. That little fox was my companion, and my friend. That idiot brutally killed him for no reason. What harm did I do to that man? Do you have any idea how much I loved that little fox, I cared for him from the first day he was born?"

The king's furious eyes met Brigid's loving ones. Yes, indeed, she could well understand it. She was truly sorry for his loss for she loved all animals and especially tame little foxes. Look here . . . she beckoned forward her new pet from the woods that had been crouching behind her.

The king forgot his anger in this new interest. He and his household looked on delightedly while Brigid proceeded to put the fox through all kinds of clever tricks. It obeyed her voice and tried so hard to please her that the onlookers were delighted.  Soon she was surrounded by laughing faces.

The king told her what his own little fox used to do. "See, it used to jump through this hoop, even at this height." Well, so could Brigid's .When the king's fox wanted a titbit, it used to stand on its hind legs with its fore paws joined as though it were praying, and so could Brigid's. Could anything be more amusing? When his mood had completely changed, Brigid offered her fox to the king in exchange for the prisoner's life. Now the king agreed and he even promised Brigid that never again would he inflict any kind of punishment on that idiot workman, whose misdeed he would soon forget.

Brigid was very happy when the prisoner was restored to his wife and children and she went back home to the monastery. However, the little fox missed her and became restless and unhappy. It didn’t care when Brigid led him into the castle, but without her the castle was a prison. After a while the king left on business and no one else bothered much about the new pet. The fox waited for its chance and when it found an open door, it made good its escape back to the woods.

Presently the king returned and there was commotion when the pet was missed. The whole household was sent flying out to search for it. When they failed to find the fox, the king's hounds were sent to help in the search, their keen noses snuffing over the ground for the fox's scent. Then the king summoned out his whole army, both horsemen and footmen, to follow the hounds in every direction. It was all no use. When night fell, they all returned wearily to their king with news of failure. Brigid's little pet fox was never found again.

So if you are walking through the woods one day and see a little fox with big brown eyes say “hello”. You never know it might be related to Brigid’s fox.

Image = Scene of the blessing of St. Brigid of Kildare.
Artist = Lorenzo Lotto.  Completion Date: 1524, Italy.  Fresco in the Oratory Suardi in Trescore,

Posted by SilentOwl at 7:10 AM