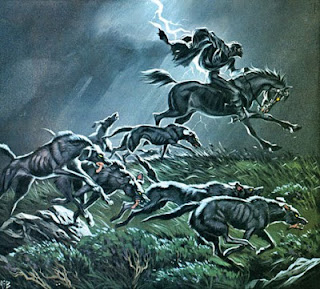 On these cold winter evenings it seems an easy thing to sit by the fire with the lights out.  Shapes and shadows flicker in the darkness, and it is within these shadows that you will find The Sluagh who forms part of The Wild Hunt. They have haunted Irish folklore for as long as people have looked into the flames and allowed their imagination to take hold.  Even Death itself must defer to The Sluagh in an unholy race for the immortal souls of the living.  However, once Christianity arrived in Ireland The Sluagh was transformed into dead sinners that were once human and humans became their prey.

It has been suggested that one of the ways of dissuading the Sluagh is to sacrifice another in your place.  However, if you are willing to do that then I think you are destined to join them at some point in the future.  There are accounts of the Wild Hunt throughout Europe and they were once thought to be a prelude to war, famine, and disease. The foundations of the Wild Hunt spread back thousands of years, far back into the mist of time.  It was once believed that local heroes both of history and legend would be called to join the hunt when their time came, and it was they who would become the ghostly leaders of the pack.  The origins of the hunt embody memories of war, myth, worship and superstition.  You will find reference to it in literature and folklore that refers to the dead travelling together or where heroes of old rise up to fight the foreign invader.

In Irish folklore we can read of Fionn Mac Cumhailln who is said to sleep in a cave surrounded by the Fianna, ready to rise up again to return to defend the Irish people. Even today we see the tradition of the dead rising up in plays that take place at certain times of the year here in Ireland.  The plays, which have their origins in the ancient past, have come down to us today in the form of Mummers.  They form part of a modern take on the Wild Hunt which can also be seen  portrayed in many fantasy films such as The Lord Of The Rings/The Hobbit where the dead rise up to help in the fight.

My hide unto the Huntsman
So freely I would give,
My body to the hounds,
For I'd rather die than live:
So shoot him, whip him, strip him,
To the Huntsman let him go;
For he's neither fit to ride upon,
Nor in any team to draw.
Poor old horse! You must die!
Traditional song sung by the Mummers.

It is not surprising that stories of the Wild Hunt are prevalent in countries that have a history of being invaded or who frequently invade others.  Therefore, French, German, British, Anglo-Saxon and Germanic peoples all have strong ties to the folklore of the Hunt.  Although the Wild Hunt may be met at any time of the year, especially those times associated with the dead it is most prevalent during the long, dark nights of winter.  In some cultures Yule was a time when the dead were said to walk among the living, it was a time to honour your ancestors and food was left out for them and an extra place would be set at the table. It was believed that in this way a good harvest would result the following year. In Norway peasants would leave a sheaf of corn in the fields to feed the Huntsman’s horses and up until quite recently the young men of Norway enacted the Wild Hunt at Winter Solstice. Their task would be to punish those who violated the rural traditions.  If the riders were given food and drink, however, they usually left quiet happy and you were assured of prosperity.

There have been tales of the Wild Hunt appearing during the twentieth century.  A folklore scholar, WY Evans-Wentz while travelling through Ireland, Scotland, The Isle of Man, Cornwall and Brittany from 1908-1910 recorded firsthand accounts of peoples experiences with the Faerie folk. He wrote of them in his book The Faerie Faith in Celtic Countries.  He gave a description of a child in Barra Scotland apparently taken by the Hunt, whose lifeless body was found at the back of the house with the palms of his hand in the holes of the wall the next morning.  It was believed that the child’s lifeless body was dropped from a great height once the soul of the child had been taken by the Sluagh.  The fact that the body was returned by the Hunt would suggest that a more human hand was at work.  May be the child was murdered and left there under cover of darkness.  Sometimes the Hunt or the Sluagh were used as a convenient scapegoat.  Many disappearances of minor criminals or the less desirable (vagrants) may have also been attributed to these paranormal forces rather than the more earthly elimination processes that may have benefited the local communities.

The Hounds of Hell.
The calkins clinkered to a spark
The hunter called the pack;
The sheep-dogs' fells all bristled stark
And all their lips went back.
"Lord God," the shepherds said, "They come,
And see what hounds he has;
All dripping bluish fire and dumb,
And nosing to the grass.

"And trotting scatheless through the gorse,
And bristling in the fell:
Lord, it is death upon the horse,
And they're the hounds of hell!"
John Masefieldfrom

Horses and dogs attend every version of the Hunt.  They are usually black, white, or gey.  They often have fire issuing from their mouths and nostrils, fiery eyes and may be missing limbs or have extra limbs.  Sometimes they may have no heads, the horses of the death coach are an example of this.  In some instances the missing of a head is a clear sign of Otherworldliness (the Dullhan).  In Irish mythology the black dog is called Cu sidhe or Coinn lotair, the faerie hound, a large fearsome creature.

"When the winter winds blow and the Yule fires are lit, it is best to stay indoors, safely shut away from the dark paths and the wild heaths. Those who wander out by themselves during the Yule-nights may hear a sudden rustling through the tops of the trees - a rustling that might be the wind, though the rest of the wood is still.
"But then the barking of dogs fills the air, and the host of wild souls sweeps down, fire flashing from the eyes of the black hounds and the hooves of the black horses"

So remember if you want to avoid upsetting those of the Wild Hunt then respect the dead, acknowledge the sacrifices of your ancestors, and rejoice in the telling of the tale.
Posted by SilentOwl at 7:52 AM