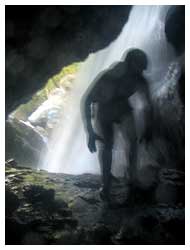 Mythology of the Dark men.

There is an urban myth that has become very popular and seems to have taken on a life of its own.  Created for an internet competition by Victor Spurge in 2009 I refer of course to The Slender Man.  An evil entity that feeds upon children, it is described as being a creature of the shadows, unnaturally tall and thin.  It is said to have no face, its arms are capable of stretching to inhuman lengths so as to ensnare any child that crossed its path.

The Slender Man was reportedly seen just before the disappearance of a child or children and favours woodland areas.  He will however, roam the streets on nights that are shrouded in fog or mist.  It is said that adults cannot see him, children can and often do see him in dreams or nightmares, particularly just before they go missing.  Once seen, The Slender Man will always be with you, just out of view, you will see him as a shadow or shape out of the corner of your eye yet when you look there is nothing there only a deep feeling of unease.

Was the Slender Man created by using bits and pieces of folklore from around Europe and the U.S.A.?  It is possible that the myth was inspired by figures such as Death or the Grim Reaper and that it has now taken on a life of its own in the imagination and fears of those who have become believers. There are a number of different myths that are associated with these dark figures.

The Grey Man is a figure from Scotland’s folklore. Sightings have been made over hundreds of years by walkers who have seen a spectre like figure.  He is said to haunt the second highest peak in Scotland, Ben Mac dhui, in the Cairngorms.  The Grey Man has been described by those who have seen it as a huge ape like figure.  He has been seen by such eminent mountaineers as Professor Norman Collie in 1891, although he was well known to be a practical joker so this could have been a publicity stunt.  Henry Kellas was reported as spotting The Grey Man at the turn of the twentieth century but this was never verified.  Peter Densham heard his footsteps following him on the Cairngorms in 1945.  Alexander Tewnion another mountaineer and naturalist reported that in 1943 he was attacked on the mountain by a strange shape, he fired his revolver at it three times but it had no effect. Tewnion turned and fled.

A similar entity has been reported around Lough Dhu in Antrim. An account in the Ulster Journal of Archaeology in 1858 tells of two men who saw him standing on a pillar in the middle of the Bush River.  Although they tried to talk to him they were ignored and eventually overcome with a deep sense of fear they ran home.

The Fear Dubh.
This is a rare legend from Scotland concerning an entity that is said to haunt the dark footpaths and forests at night.  Was it created to scare children in order to stop them roaming at night and getting lost?

The Faceless One.
Now this one dates to the 18th century in Wales.  It was created by ‘caring’ parents in order to stop them from being naughty, and to keep them away from the forests.  It was said that children often disappeared at night and were found the following days mutilated almost beyond recognition.  The parents even had a rhyme to go with it.

Hush, thy childe, do not stray from the path,
Or The Faceless One shall steal you away to Fairieland.
He preys on sinful and defiant souls,
And lurks within the woods.
He has hands of ebony branches,
And a touch as soft as silk.
Fear The Faceless One thy childe,
For he shall take you to a dark place.
And what shall become of thou?
No one knows, so be good, thy little one-
Alas! He is here to take thou away!'

Now isn’t that a lovely little bedtime lullaby. No wonder children suffered from the night terrors.

The Nucklavee.
This is a creature that is feared in the folklore of Orkney.  The word means Devil of the Sea and he was a creature of pure evil whose sole purpose was to plague the islanders.  Although its home was the sea the Nucklavee had no problem roaming dry land but it had a terror of fresh water, particularly rainwater.  It was while he was on land that he was seen riding a horse as monstrous as himself.

Over time Storytellers have merged the two monsters together so that the horse and rider have become one and this is now the Nucklavee true shape.  He is said to have a head shaped like that of a man but “Ten times bigger”, a wide mouth and a pig’s snout, he also has only one eye that burns with a red flame.  His body is not only hairless but also skinless, its body a mass of raw flesh, you can see its thick black blood coursing through his veins. Again his arms are long and ape-like.

The Fetch.
Also known as: doppelgänger

According to Irish folklore, a fetch is a supernatural double of a living person. They are generally regarded as a very bad omen: anybody who sees a fetch that has taken on their appearance is doomed to die, and soon. However, some folklorists claim that if a fetch first appears in the morning rather than the afternoon or evening, it’s actually a sign that whoever the fetch has imitated has a long life ahead of them.

The Sack Man.
Also known as: the Bag Man; the Bugbear
In Latin and Eastern European folklore, the Sack Man is a skinny, foul-tempered and unspeakably ugly old man who scoops up children from off the street, bundles them into his sack, then takes them back to his filthy hovel and devours them.

The Fír Gorta.
In Ireland the Fír Gorta or Man of Hunger.  He was a tall thin man dressed in black raggedy clothes. He travelled from place to place, village to village, town to town during times of famine.  It was said that when he knocked on your door you would welcomed him as you would a stranger and offer him a little food and drink even though food was extremely hard to come by during the famine.  For this reason many would hide behind closed doors, some would deny him any food or drink, some would even chase him from the door.
It was said that for these people there would be no hope and that they had sealed their fate, death by starvation.  For those who spared a small piece of potato or a drop of milk, even if that was all the family had, or those who genuinely had nothing except the offer of a welcome hand, the Fír Gorta would thank them for their generosity, politely refuse their offers and take his leave of them.  However, before he left he would say “Because of your generosity and your honest welcome today you will be truly blessed.  Neither you nor your family will ever die of the hunger, tell no others of what has passed her but from this day forth your pot will never be empty, your jug will never run dry
.
It was said that in the morning the mother of the house went to the pot and found within it a great big potato, more than enough to feed the whole family and a jug that was brimming over with fresh creamy milk.  It would be the same each morning and they survived the famine.

If like me you are interested in folklore you will find a whole host of dark slender men who wander the night looking for lost souls, children, and victims.  From the Sandman to the Candy man, to the Scare Crow and the Sack Man you will find similar spectral beings recorded in the folklore of all societies.  Old stories told by the ancients around camp fires right up to the present day with the television or silver screen replacing the fire. Dr Who and the Silence, Steven Spielberg’s IT, Hans Christian Anderson, Grimm’s Fairytales, to W.B. Yates.  All the myths and legends are there for you.  Hopefully we can continue to add to this rich tapestry and the urban myth will take its place with things that go bump in the night.
Posted by SilentOwl at 2:59 AM