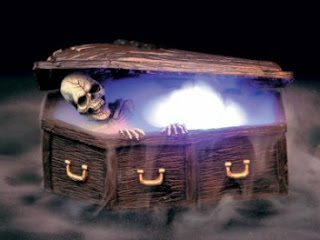 Once upon a time, just outside a small town in the west of Ireland:

There lived a family called Murphy.

Dermot Murphy was a big, strong man but he was known by the locals as ‘the poor mouth’ because of his miserly ways. However his wife Mary was a small, pretty woman who was always willing to help anyone, as was his daughter Brigit.

The land they lived on was poor, boggy and not much use for anything. The Murphy’s cottage was by the side of the road, at the bottom end of the garden there grew a small oak tree.  The cottage was small with a kitchen, living room and two small bedrooms. Their water was supplied by a well in the garden and they had no electricity as Dermot believed it to be the work of the devil.  The real reason was he didn’t want to pay the bill.

Dermot Murphy was a mean looking man; he was cruel and refused to part with a single penny for anything unless it benefited himself.  So mean in fact that when his poor wife Mary died he refused to buy her a decent coffin or even to pay for a burial plot in the local cemetery. He bought the cheapest wooden box he could find then buried her in a shallow grave at the bottom of the garden near the oak tree   His daughter Brigit was extremely upset at the way her poor mother was treated, and although she cried and begged her father to give her a decent burial it was to no avail.

Dermot wasn’t poor; in fact he had a great deal of gold coins that he kept in a leather purse that he hid behind a loose stone inside the fireplace.  Every night when his daughter went to bed he would take out the purse and count his money by candlelight.  If he heard his daughter stirring he would quickly hide the purse under his jacket and tell her to go to sleep and stop trying to spy on him.  When he was satisfied that his money was all there he would put it back behind the stone in the fireplace.

One night, about a year after her mother’s death, Dermot was sat counting his money as normal.  Brigit came into the room, she said that she wasn’t feeling very well and she asked her father to get the doctor.

Of course the first thing her father thought of was the cost,

“Arragh, don’t be worrying, it’s only a bit of a pain, go on back to bed, you’ll be fine in the morning”

Brigit was in no state to argue, she was pale and clammy.  She did as her father told her and went back to her bed.  A short while later her father heard her groaning and she came back into the room again.  This time she looked dreadful and once more begged him to get the doctor.

“Will ye go back to bed and don’t be spying on me” he said.

Once more she did as she was told, he heard her groaning for a while, and then there was silence.
Later that night Dermot was happy his money was all correct, he put it back into its hiding place and was just about to go to his bed when he thought he’d look in on his daughter.  He found her half in and half out of her little bed. She was very quiet; he felt her face...it felt cold, very cold.  It suddenly dawned on him, she was dead.

Dermot was very upset as this would be costly but then he had an idea, he would bury her next to her mother.  That way he’d save money and they could keep each other company. After the burial, Dermot was once again sat counting his money when a fierce storm began.  It was as bad as the Night of the big wind in 87.  The following morning the local townspeople were sorting out the damage to their properties.  They didn’t notice that Dermot didn’t visit the local pub to get his few ounces of tobacco and a pint.  However, when no one saw him for a few days, the locals began to wonder where he’d got to.  They decided to pay him a visit.

When they arrived at Murphy’s cottage they noticed that there was some damage caused by the storm.  At the bottom of the garden they saw that the little oak tree had been uprooted and that in the middle of the garden there was a coffin.  As they went through the gate and approached the cottage one of the locals shouted out and pointed.  Halfway in and halfway out of the front door was another coffin. They looked through the window and there they saw Dermot Murphy.  He was sat upright in his chair, he was as stiff as a board, his eyes frozen, staring horribly, and his mouth wide open as if screaming in terror.  One hand raised, as if trying to protect himself, the other seemed to be pointing at the coffin which was half open.

In the coffin lay Brigit, peaceful in death, her hands joined together as if in prayer.  It was the normal custom to bury the corpse with the hands holding a set of rosary beads.  However, the locals saw that instead of holding a rosary, Brigit was clutching a leather purse.  When they prised the purse out of her hands they found it to be full of gold coins.  They counted it out and found that there was just enough money to buy new oak coffins, one for Brigit and one for her mother Mary and to pay for a decent pair of plots in the local cemetery.

Unfortunately, there was not enough money left to bury Dermot.  However, the locals managed to use the wood salvaged from the cheap coffins Murphy had buried his wife and daughter in.  They buried him at the end of the garden, where the oak tree used to be.

There has to be a moral there..somewhere,