Some Irish Contributions To The World. 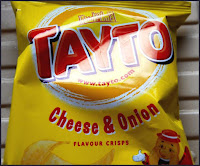 I thought I would finish off this month with something a little bit different.These are only a few things we have given to the world. There are many many more, why not think of some.

Cheese and Onion Crisps
At one time you could only get potato crisps in one flavour, plain with salt. In 1954, along came an Irishman of the name Joe ‘Spud’ Murphy, a pure genius. It was he who in a kitchen on Dublin’s Moore Street developed the now classic Cheese and Onion flavour and the rest is history.

The Submarine.
John Philip Holland, an engineer born in Liscannor, County Clare not only developed thefirst submarines for both the U.S. Navy and the British Royal Navy at the turn of the last century but he also built one for the Fenians.

The Tractor.
Harry Ferguson, born in County Down developed the first four wheel drive Formula One car and was also the first Irishman to build and fly his own plane. In 1929 he also gave us the modern tractor. His name lives on in the Massey-Ferguson Name.

Chemistry.
Robert Boyle, born in County Waterford he came up the foundations of modern chemistry in 1661 when he published The Sceptical Chymist.

Nuclear Physics.
Ernest Walton could also be described as the inventor of a new field of scientific endeavour, and he was from Waterford too. Born in 1903 in Dungarvan, Walton, together with John Cockcroft, was the first person to artificially split the atom, thus creating nuclear physics and making possible power-stations, A-bombs and everything they brought with them. In 1951, he became Ireland's only Nobel science laureate, when jointly awarded the Prize for Physics.

The White House.
An architectural competition was held to find an architect that could design a House for the U.S. President, Goerge Washington. Washington had long admired the work of James Hoban, in particular Charleston County Courthouse which he saw when visiting the southern states and he gave the Kilkenny man the commission. Hoban was influenced by our own seat of government, Leinster House in his 1800 design, so in effect you might be forgiven for referring to Leinster House as ‘The Green House’.

Guided missile.
Louis Brennan, born in Castlebar County Mayo in 1852 (died 1932). He was the inventor of the world’s first guided missile. It was a torpedo type device which was used as a coastal defence weapon. Brennan also designed a momorail and a helicopter. Ironically for a man who lived for machines, he was killed when he was struck by a car.

Guinness.
Beer drinkers around the world have the Irish to thank for the invention of the Black Stuff. The stout, which is the best-selling alcoholic drink of all time in Ireland, but also popular globally, originated in the brewery of Arthur Guinness at St. James’s Gate, Dublin. On 31 December 1759 he signed a 9,000 year lease at £45 per annum for the unused brewery.

Nicholas Callan.
The induction coil -- found in car ignition systems, TVs and other electronic devices -- was invented by scientist and priest Nicholas Callan in 1836. Callan was from Darver in Co Louth, and he studied at Sapienza University in Rome. After returning to Maynooth as the new Professor of Natural Philosophy (what they called Physics back then), he began working with electricity in his lab -- which sounds like something Baron Frankenstein might have done. In 1837, he was generating an estimated 600,000 volts -- enough to give life to any monster.

Dr. James Drumm.
On a related note, Co Down-born chemist Dr James Drumm invented the rechargeable nickel-zinc battery, which is today used in cordless tools and telephones, digital cameras, electric vehicles and loads of other places. Drumm, born in 1897, was also involved in other scientific breakthroughs during a varied and colourful career: he produced an unusually fine soap and worked on an early version of food processing, as well as devising the battery which was used on Dublin trams for many years.
Posted by SilentOwl at 3:31 PM