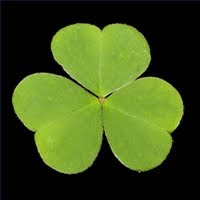 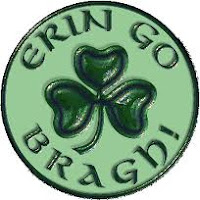 The shamrock in folklore.

Three is Ireland's magic number. Numbers played an important part in Celtic symbolism Three was the most sacred and magical number. It multiplies to nine, which is sacred to St. Brigid. Three may have signified totality: past, present and future, sky, earth and underground. Everything good in Ireland comes in threes - the rhythm of Irish storytelling is based on three-fold repetition. This achieves both intensification and exaggeration. " Three accomplishments well regarded in Ireland - a clever verse, music on the harp, the art of shaving faces."

The first legend is associated with the word “shamrock”. The word “shamrock”, first used by the English herbalist John Gerard in 1596 (Some references claim a reference in 1571), is the English version of the Irish word “seamrog” which means “little or young clover” and also can mean “summer plant” symbolising the rebirth of spring. Irish records were still recording "seamrog" and not "shamrock" in 1707. So it would appear that the word “shamrock” was not accepted or adopted until after the 18th century in Ireland.

Some legends suggest that the plant began its historical and symbolic journey with the Druids of Ireland. As in many religions, three was a mystical number in Celtic religion and the shamrock was sacred to the Druids because its leaves formed a triad. To prove this theory, we may need to look at when the Celtic word "seamrog" was first used, but that proof is elusive, lost in unrecorded times. However, many sources agree that the ancient druids honoured it as a sacred plant.

The druids believed that it had the power to avert evil spirits and that it had mystical and prophetic powers. It is said that the leaves of the shamrock turn upright whenever a storm is coming. It was also believed to be a remedy against the sting of scorpions and the bite of snakes. Actually, many spiritual belief systems, ancient and contempory, find the number 3 to have mystical properties. The shamrock was considered a sacred plant to ancient Iranians, for example. They knew it as “shamrakh” and honoured it as a symbol of the sacred 3’s.

Shamrock/Seamrog has acted as a magical plant for thousands of years throughout the Celtic lands. It has been suggested that the ‘triskle’ is a representation of the trefoil, the three leaves of the shamrock. It is associated with the festival time of beltaine, young women would take a clover dew bath at dawn or at the very least wash their faces with the morning dew.

Throughout recorded history, the number three has always been thought of as being magical. Even in the present day, a person finding a four-leaf clover in a field of three-leaf clovers (quite a rare occurrence) is believed to be the recipient of double good luck. One leaf stands for hope, the second for faith, the third for love, and the fourth for luck.

In Ireland, the four leafed shamrock or seamróg na gCeithre gCluas, was very lucky in folklore because of its rarity. The possessor of such a shamrock was believed to gain a host of supernatural powers. Whoever had it would have luck in gambling and racing, could not be cheated in a bargain or deceived and witchcraft would have no power over him/her. Whatever he/she undertook would prosper and through the power of the shamrock wonderous things could be achieved. It also gave the possessor the power to see and to know the truth and the power of second sight.

Before the 16th century record of the shamrock, there are many stories that connect the shamrock with Saint Patrick and hence, by default, it becomes a major symbol of Saint Patrick's Day on 17th March and Christianity. According to one legend, in the 5th century Saint Patrick plucked a shamrock from the soil to illustrate his Christian message to the Irish. Here was Nature's proof of the Holy Trinity in the three leaves of the shamrock. (The number three was always a number of magic. It is easy to see how the three leafed shamrock meant good luck).

However, nowhere is the shamrock mentioned in Patrick’s own writings, or in any of the early biographies of his life. Again, it seems very difficult to separate history from symbolism and legend. The shamrock has further Christian association. At one time it was planted on graves.

On a more practical level, clover was prolific, which indicated security and fecundity to the ancient Celts, as well as being a substantial food source for local cattle, which associated it with abundance and provision. Dioscorides believed it could cure fevers and inflammations of the groin, and herbalists use it in the treatment of coughs. By the medieval period it had become a symbol of true love, both wordly and divine, and had influenced architecture in the form of the Gothic three-lobed arch.

In more recent years, highly sensitive drug testing seems to indicate that clover contains traces of morphine, which can be passed into milk produced by cows that graze on clover. This idea is still under investigation. On the positive side, clover is high in protein and quite digestible if boiled for 5-10 minutes. Clover leaves and seed pods can be dried and used for tea or ground into flour for baking.
Posted by SilentOwl at 11:22 AM