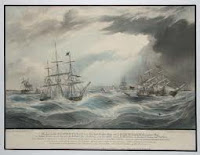 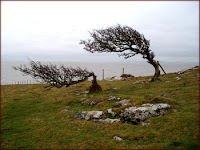 Oidhche na Gaoithe Móire. The Night of the Big Wind (Part One).

The Night of the Big Wind is now part of Irish mythology. Obscure accounts, real and imaginary, of events that took place on that famed night have been handed down through the generations.

On the evening of Saturday 5th January 1839 heavy snow fell throughout Ireland. The morning was completely calm and the sky was covered with motionless dense cloud. As the morning progressed the temperature rose well above the January average. The snow quickly melted.

Unknown to all a deep depression was then forming in the north Atlantic. As the warm front which covered the country gradually moved eastwards, and rose in the atmosphere, it was replaced by a cold front which brought with it high winds and heavy rain.

The rain commenced before noon in the west and spread very slowly eastwards. In Mayo, the late afternoon turned chilly while the east of the country still enjoyed the unseasonably high temperatures experienced in Mayo earlier that day. At dusk, wind speeds increased, conditions got colder and alternate showers of rain and hail began to fall.

By nine o'clock at night the wind had reached gale force and continued to increase.

By midnight it had reached hurricane force and remained at that level until five o'clock in the morning when it reduced again to gale force. During the hurricane the wind blew variously from the south-west, west and north-west. Gales continued until six o'clock on Monday evening.

From the ecological point of view the storm was a disaster. Millions of wild birds were killed causing the near extinction of crows and jackdaws. Their traditional nesting places were wiped out. When spring eventually came the absence of song birds was noticeable. Historic ruins such as Norman tower-houses and churches were badly destroyed never to be restored. Tombstones in cemeteries were knocked over. Roadways were rendered impassable by fallen trees thus causing havoc to transport and mail deliveries for the following week.

Sea water was carried inland by the force of the storm and flooded houses when it poured down chimneys. The most abiding memory of the night, and its aftermath, that remained with people was the smell of salt which lingered in houses for weeks. Seaweed too was carried inland for great distances. Herrings and other fish were found miles from shore.

There were people in every community who practiced weather forecasting (with a degree of success) using such factors as the lunar cycle, appearance of the sky and sea, wind direction, the behaviour of birds, animals, fish and insects and their own intuition. The concept of meteorology was alien to the vast majority who experienced the Big Wind. Amateur weather forecasters failed to predict the event. Consequently people sought their explanations elsewhere.

The superstitious, that numbered among its ranks the vast majority of the peasantry, were quick to attribute the storm to the fairies. Traditionally the 5th of January was the feast of St. Ceara, when, it was believed, the fairies held a night of revelry. The fairies, they thought, caused such ructions that the storm resulted. Others believed that on that night all but a few of the fairies of Ireland left the country never to return and that the wind was caused by their departure.

Freemasonry, traditionally seen by Irish Catholics as associated with demonic practise, was considered to be another possible cause. Some people were of the opinion that Freemasons had brought up the devil from hell - and couldn't get him to return.

The weather remained unsettled in the days after the Night of the Big Wind and occasionally the wind became gusty causing people to fear that the storm would return.

In mid-January the aurora borealis reappeared again stirring up panic. The ill wind blew well for some people: merchants, carpenters, slaters, Thatcher’s and builders in particular were busy renovating public buildings and the properties of the wealthy. The poor, who could not afford to hire such services, had to survive as best they could.

The Night of the Big Wind happened prior to the introduction of government relief measures and widespread insurance. The relationship between landlord and tenant dictated that the tenant made good damage caused by storms. What little reserve of cash was held by the poor was used up in rebuilding and restocking.

In many cases houses were re-built in sheltered locations at the bottom of hills, and for many years, until the advent of sturdier building materials, shelter from the wind was a primary factor in choosing a house-site Famine followed seven years later. It almost completely wiped out the class that suffered the most on the Night of the Big Wind.

Email ThisBlogThis!Share to TwitterShare to FacebookShare to Pinterest
Labels: Folklore and the weather