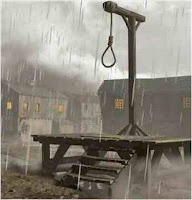 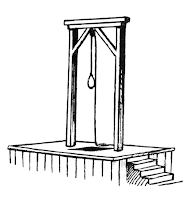 Lady Betty was famous as a cruel hangwoman who worked in Roscommon Jail in the eighteenth century. According to Sir William Wilde, she drew a sketch of each of her victims on the walls of her dwelling with a burnt stick.

Born into a tenant farmer’s family in County Kerry, the woman who came to be known as Lady Betty married another poor farmer, named Surgue, and they had a family. On his death, Betty and her three children were left destitute.

She set out with her children on the long walk to Roscommon town to look for a better life. En route her two younger children died of starvation and exposure, leaving only her elder son. On reaching Roscommon, Betty and her son moved into an abandoned hovel and begged, borrowed and stole to eke out a sparse living. She was known to have a violent, cruel temper and whether it was because of this or the grinding poverty (or a combination of both) her son decided to leave and go to America to seek his fortune. He promised to return one day a rich man.

Years passed, and Betty supplemented her meagre income by taking in desperate lodgers and travellers for a few pennies a night. One stormy night a traveller arrived at the door looking for a room. Betty took him in but she noticed how well dressed he was and he had a purse full of gold, not like her normal guests. The temptation proved too much, she waited until he was asleep, then stabbed him to death and robbed him.

Tragically for her, as she was going through his belongings she found papers that identified him as her son, unrecognisable after years apart. It has been suggested the reason why he had not identified himself to her was that he wanted to find out if she had changed from the violent bad tempered person he had known, unfortunately for him she had not. Betty was arrested and tried for murder and sentenced to hang.

The day of her execution arrived and she was led to the scaffold together with others due to be hung. Amongst the various thieves, sheep stealers and murderers were some Irish rebels and Whiteboys. However, because of local loyalty to the rebels, no hangman could be found so the authorities did not know what to do. This was when Betty made her mark on history. She said to the Sheriff “Set me free and I’ll hang the lot of them”. She killed twenty five that day and with the full support of the authorities she continued her gruesome work right across Connacht.

She lived rent free in a third floor chamber at the prison, and although she was paid no salary she loved her work and never had to worry about food. She had a very public method of hanging too; a scaffold was erected right outside her window, and the unfortunate person had to crawl out, ready- noosed, and stand there as she pulled a lever, swinging him to kingdom come. She had a nasty habit of leaving the bodies placidly "do the pendulum thing" while she sketched them in charcoal. When she eventually died, in the first decade of the 19th century, her room was decorated with the images of the hundreds of people she had happily sent to their deaths.

Lady Betty’s cold-hearted actions meant that she was universally feared, loathed, hated and shunned. Eventually she was given lodgings inside the prison grounds for her own safety. In 1802 she received a pardon for her own horrific crime. By the time of her death in 1807 a powerful myth had built up around her, but it would be many years before mothers stopped threatening their children to watch out, if you don’t behave Lady Betty will get you. She is buried inside the walls of Roscommon Jail, the scene of her hideous handiwork.

the top image is of Roscommon Jail.

She was not a Great Irish Woman of history but I thought it an interesting piece of folklore.
Posted by SilentOwl at 5:27 AM