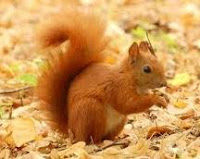 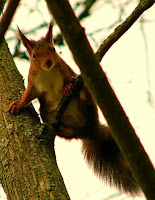 Now I was reading a very interesting book by David Cabot (Ireland) and on page 257 I came across a very interesting account of the Red Squirrel (well I think it is interesting) that I thought I would share with those who read this blog. It strays a little from my normal route but it’s a cold night.

The native species is the red squirrel, which is more at home in coniferous woodlands. Formerly widespread throughout the country, red squirrels became extinct sometime after the middle of the seventeenth century for reasons not entirely clear but probably related to capture and killing of the animals for their fur which was a valuable commodity at the time. The last known date recorded for taxes levied on the export of skins was in an Irish statute of 1662, It is generally considered that the red squirrel died out soon after 1662.

After its demise the red squirrel was reintroduced to Ireland in the early nineteenth century and has since spread to all counties but seldom in close proximity with the grey squirrel-due probably to interspecific competition for food and breeding territory.

From inquiries carried out by the Victorian naturalist Richard Manliffe Barrington who investigated the reintroduction date, it would appear that the great-grandfather of Francis Synge-a relation of the playwright John Millington Synge-of Glanmore Castle, Ashford, County Wicklow, was responsible for the reintroduction at Ashford sometime between 1815 and 1825.

There were many subsequent reintroductions of red squirrels brought from England, throughout Ireland during the mid and late nineteenth century. They are now firmly established as part of the Irish fauna (Cabot, 1999).

• They store nuts in the ground in the autumn.

• They can be right- or left-handed when they eat a pine cone!

• They will occasionally strip bark from trees (usually conifers).

• Squirrels moult their coat twice a year, once after winter and then in the late summer before the weather gets colder again.

• They moult their ear tufts only once a year, in late autumn.

• They can live to six years of age.

• They have four fingers and five toes.

• They are not always red in colour but can also be brown, almost black or quite grey!

• Squirrels live high in trees in a nest made from twigs, leaves and moss. This is called a drey.

• The drey may be in a hole in the tree or set against the trunk and branches.

• Pregnancy lasts 36-42 days and their young are called kittens.

• Kittens are born with their eyes closed, without teeth and with no hair. After about seven weeks they look just like small versions of their parents and are ready to leave the drey.

• There can be two litters a year, with 3–4 kittens in each litter.

• Average densities in conifer and broadleaf areas are 0.5–1.5 red squirrels per hectare.

• They do not hibernate over winter, but may be less active when weather conditions are bad.

• They can hang upside down!

• Red squirrels are extremely susceptible to Squirrelpox virus, (carried by the grey) which is lethal.

I shall now return to my normal blog postings but I can't promise not to stray again???
Posted by SilentOwl at 8:55 AM